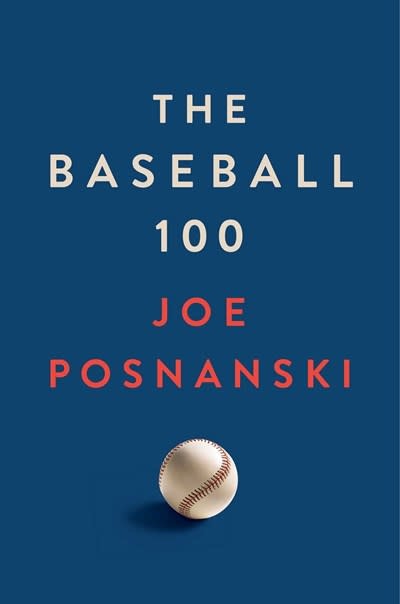 A magnum opus from acclaimed baseball writer Joe Posnanski, The Baseball 100 is an audacious, singular, and masterly book that took a lifetime to write. The entire story of baseball rings through a countdown of 100 greatest players in history, with a foreword by George Will and published in partnership with The Athletic.

An instant classic of baseball literature and a must-read for any fan, The Baseball 100 is a one-of-a-kind work by award-winning sportswriter Joe Posnanski that tells the story of the game through the remarkable lives of its 100 greatest players. In the book’s foreword, Pulitzer Prize–​winning commentator George Will marvels, “Posnanski must already have lived more than two hundred years. How else could he have acquired such a stock of illuminating facts and entertaining stories about the rich history of this endlessly fascinating sport?”

Baseball’s legends come alive in these pages, which are not merely rankings but vibrant profiles of the game’s all-time greats. Posnanski dives into the biographies of iconic Hall of Famers, stars of the Negro Leagues, forgotten heroes, talents of today, and more. He doesn’t just rely on records and statistics—he lovingly retraces players’ origins, illuminates their characters, and places their accomplishments in the context of baseball’s past and present. Just how good a pitcher is Clayton Kershaw in the twenty-first-century game relative to Greg Maddux dueling the juiced hitters of the nineties? How does the career and influence of Hank Aaron compare to Babe Ruth? Which player in the top ten most deserves to be resurrected from history?

Engrossing, surprising, and heartfelt, The Baseball 100 is a magisterial tribute to the game of baseball and the stars who played it.

Joe Posnanski is the #1 New York Times bestselling author of six books, including Paterno and The Secret of Golf. He has written for The Athletic, Sports Illustrated, NBC Sports and The Kansas City Star and currently writes at JoePosnanski.com. He has been named National Sportswriter of the Year by five different organizations and is the winner of two Emmy Awards. He lives in Charlotte, North Carolina, with his family.