Home » The Book of Boy 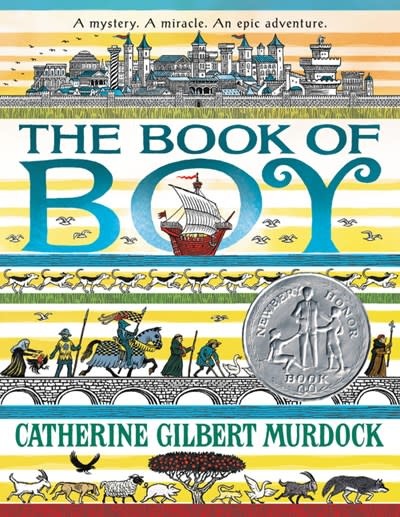 The Book of Boy

A Newbery Honor Book! A young outcast is swept into a thrilling and perilous medieval treasure hunt in this award-winning literary page-turner by acclaimed bestselling author Catherine Gilbert Murdock. The Wall Street Journal called it, “A treat from start to finish.” This epic and engrossing quest story is for fans of Adam Gidwitz’s The Inquisitor’s Tale and Grace Lin’s Where the Mountain Meets the Moon, and for readers of all ages.

Boy has always been relegated to the outskirts of his small village. With a hump on his back, a mysterious past, and a tendency to talk to animals, he is often mocked by others in his town—until the arrival of a shadowy pilgrim named Secundus. Impressed with Boy’s climbing and jumping abilities, Secundus engages Boy as his servant, pulling him into an action-packed and suspenseful expedition across Europe to gather seven precious relics of Saint Peter.Boy quickly realizes this journey is not an innocent one. They are stealing the relics and accumulating dangerous enemies in the process. But Boy is determined to see this pilgrimage through until the end—for what if St. Peter has the power to make him the same as the other boys?In a starred review, Kirkus Reviews declared: “Murdock delivers a wickedly fun-filled quest that twists and turns with lyrical fire.” Features a map and black-and-white art by Ian Schoenherr throughout.

Catherine Gilbert Murdock is the acclaimed author of Dairy Queen, as well as five other novels for teens and middle schoolers. She grew up in Connecticut and now lives in Philadelphia with her family.