Home » The City Inside 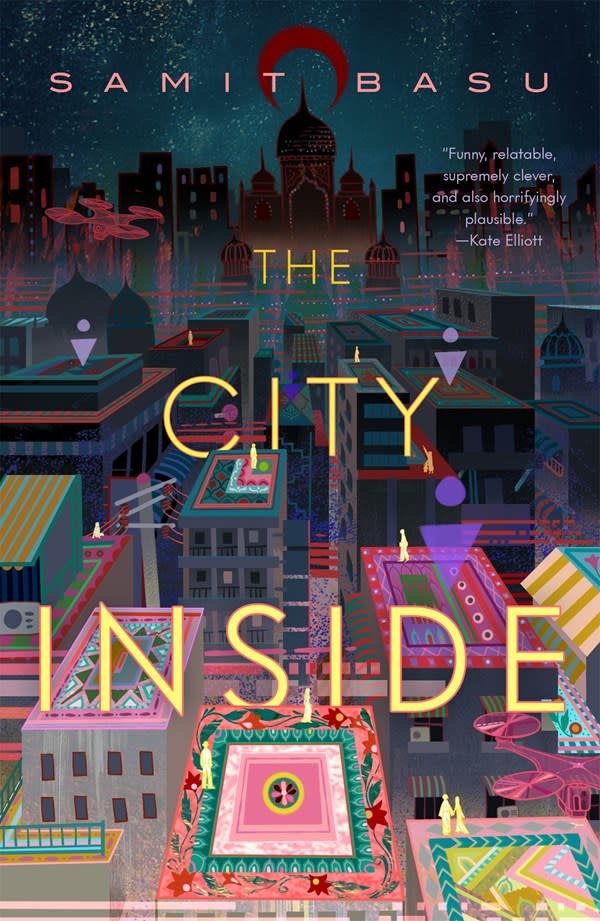 This near-future epic by the internationally celebrated Samit Basu pulls no punches as it comes for your anxieties about society, government, the environment, and our world at large—yet never loses sight of the hopeful potential of the future.

Joey is a Reality Controller in near-future Delhi. Her job is to supervise the multimedia multi-reality livestreams of Indi, one of South Asia’s fastest rising online celebrities—who also happens to be her college ex. Joey’s job gives her considerable culture power, but she’s too caught up in day-to-day crisis handling to see this, or to figure out what she wants from her life.

Rudra is a recluse estranged from his wealthy and powerful family, now living in an impoverished immigrant neighborhood. When his father’s death pulls him back into his family’s orbit, an impulsive job offer from Joey becomes his only escape from the life he never wanted.

But as Joey and Rudra become enmeshed in multiple conspiracies, their lives start to spin out of control—complicated by dysfunctional relationships, corporate loyalty, and the never-ending pressures of surveillance capitalism. When a bigger picture begins to unfold, they must each decide how to do the right thing in a world where simply maintaining the status quo feels like an accomplishment. Ultimately, resistance will not—cannot—take the same shape for these two very different people.

Samit Basu is an Indian novelist. He's published several novels in a range of speculative genres, all critically acclaimed and bestselling in India, beginning with The Simoqin Prophecies (2003). The City Inside was shortlisted (as Chosen Spirits) for the JCB Prize, India’s biggest literary award. He also works as a director-screenwriter (Netflix, 2019), a comics writer, and a columnist. He lives in Delhi, Mumbai, and on the internet.