Home » The City of Brass 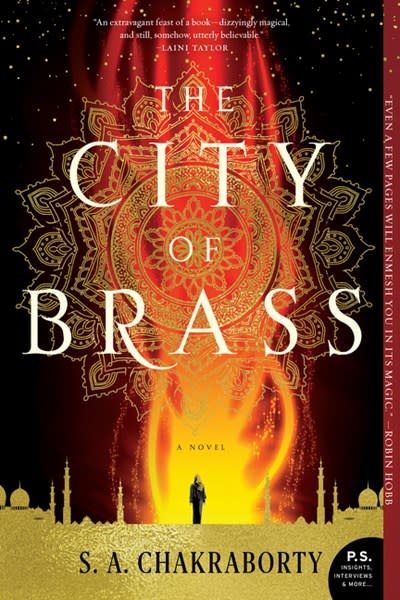 The City of Brass

By S. A. Chakraborty

Step into the City of Brass, the spellbinding fantasy in which the future of a magical Middle Eastern kingdom rests in the hands of a clever and defiant young con artist with miraculous healing gifts

On the streets of eighteenth-century Cairo, Nahri is a talented con artist, using palm readings, zars, and her mysterious curative gifts to swindle Ottoman nobles. She doesn’t believe in magic—is it her fault that her marks do? But when she accidentally summons Dara, an equally sly, darkly mysterious djinn warrior, during one of her cons, his very existence forces her to question all she believes.Dara tells her an extraordinary tale, one of a strange and enchanted metropolis that lies across hot, windswept sands teeming with creatures of fire, and rivers where the mythical marid sleep: Daevabad, the legendary city of brass. A city to which Nahri is irrevocably bound.In that city, within gilded brass walls laced with enchantments, behind the six gates of the six djinn tribes, old resentments are simmering. When Nahri decides to enter this world, she learns that true power is fierce and brutal. That magic cannot shield her from the dangerous web of court politics. That even the cleverest of schemes can have deadly consequences.After all, there is a reason they say to be careful what you wish for . . .

S. A. Chakraborty is a speculative fiction writer from New York City. The City of Brass is her first novel.