Home » The Complete One Pot 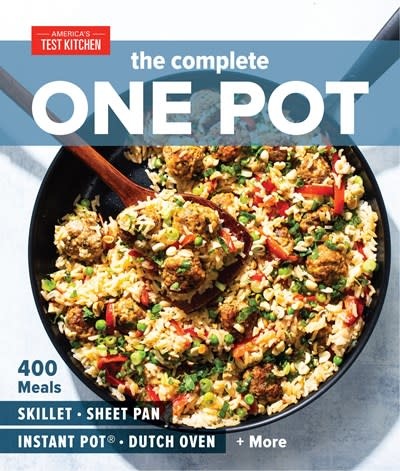 The Complete One Pot

The only one-pot cookbook you’ll ever need! Simplify dinner and eat well with hundreds of meals that take full advantage of your favorite pans.

Join the one-pot movement with The Complete One Pot Cookbook. From sheet-pan suppers to no-boil pastas, millions of home cooks want the ease of hands-off meals made using a single vessel. These flavorful recipes represent years of the test kitchen’s best strategies for successful single-pan cooking, from staggering cooking times so everything finishes at once to developing an arsenal of no-cook sauces and sides.

We flip the lid on several one-pot cooking assumptions; first, that it’s always slow. Half of the 400+ recipes can be made in 45 minutes or less. Next, that the recipes serve an army: We paid attention to smaller family sizes by adding scaled-down variations serving two throughout the book. And we made some of the all-time best recipes more flexible with choose-your-own pan options such as Classic Chicken Soup that can be made in a Dutch oven, slow cooker, or pressure cooker. Finally, we realized that decluttering dinner didn’t stop with using just one pot but also meant limiting the number of bowls.

America’s Test Kitchen publishes award-winning and best-selling cookbooks, including The Complete Slow Cooker Cookbook and Multicooker Perfection, along with Cook’s Illustrated and Cook’s Country magazines and produces public television’s top-rated shows, America’s Test Kitchen and Cook’s Country. It is a real 15,000-square-foot kitchen in Boston’s Seaport district and is home to more than 60 test cooks, editors, and tasting and testing experts.