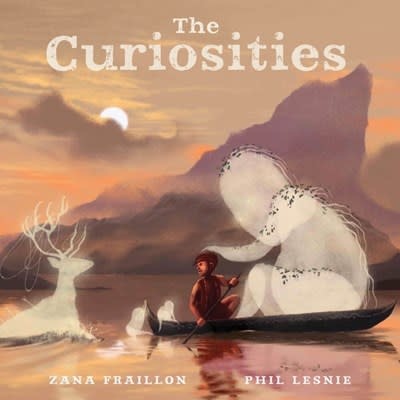 A lyrical and moving celebration of neurodiversity and self-discovery, from the award-winning author of The Bone Sparrow.With the Curiosities, a whole world of wonder awaits… One morning, at dawn, the Curiosities choose Miro to nest on. At first, he doesn’t notice. They blend in, perching on his shoulder and nuzzling into his hair. Over time, Miro discovers that he sees and feels things differently than everyone else around him. The Curiosities show Miro an extraordinary world. He weaves clouds to make stories for the wind, and marvels at the wonders waiting in the shadows where no one else looks. Sometimes, though, the Curiosities make Miro feel lost and alone: they shriek and roar, and are so bright and overwhelming that he feels invisible. But perhaps Miro isn’t as alone as he thinks... and maybe the Curiosities have chosen other people as well. This gentle, heart-touching story from award-winning children’s book author Zana Fraillon is a nuanced portrait of emotions, self-expression, and empathy. Complete with Phil Lesnie’s gorgeous art that draws on legends from his Filipino heritage, The Curiosities celebrates the varied perspectives that come with being neurodivergent and contains the triumphant reminder that those who see and experience the world differently have always been here.

Zana Fraillon was born in Melbourne, but spent her early childhood in San Francisco. Zana spent a year in China teaching English and now lives in Melbourne with her three children, husband and two dogs. When Zana isn't reading or writing, she likes to explore the museums and hidden passageways scattered across Melbourne. Zana has won and been shortlisted for some of the most prestigious prizes in children’s literature: Her 2016 novel The Bone Sparrow won the ABIA Book of the Year for Older Children, the Readings Young Adult Book Prize and the Amnesty CILIP Honour. It was also shortlisted for the Guardian Children's Fiction Prize, the Gold Inky and the CILIP Carnegie Medal, as well as the Australian Prime Minister's Literary Awards, and the Queensland Literary Awards.Phil Lesnie is a Sydney-based illustrator of children's books. He is also a children's bookseller. It is entirely possible that he hasn't read a title written for adults since he became one. He works primarily in watercolour, because in a watercolour painting even mistakes look lovely. He is the illustrator of Feathers, which was shortlisted for the Prime Minister's Literary Awards in 2018. His first three books were CBCA Notable books in 2015, 2016 and 2018. But his first cat, Cassidy, is notable all of the time.