Home » The Cursed Carnival and Other Calamities 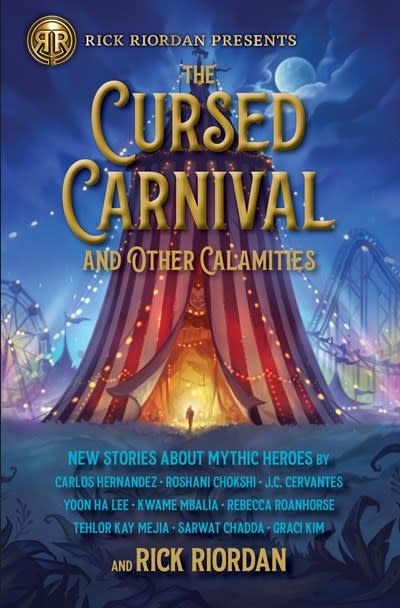 The Cursed Carnival and Other Calamities

Catalog Copy: Best-selling author Rick Riordan presents ten new stories--including one of his own--about beloved heroes that sprang from the imaginations of some of the best middle grade authors working today.

"I hope you enjoy your trip through the multiverse mansion as much as I did. The real danger is that once you start exploring all the wonders herein, you may want to stay forever."--Rick Riordan

A cave monster . . . an abandoned demon . . . a ghost who wants to erase history . . . a killer commandant . . . These are just some of the challenges confronting the young heroes in this highly entertaining anthology.

All but one of the heroes previously starred in a popular book from Rick Riordan Presents. You'll be reunited with Aru Shah, Zane Obispo, Min the fox spirit, Sal and Gabi, Gum Baby, Nizhoni Begay, Paola Santiago, Sikander Aziz, and Riley Oh. Who is the new hero? Read Rick Riordan's short story to find out!

There's something for everyone in this collection of fast-paced and funny adventure stories that show what it takes to be a hero in any time, setting, and universe.

Author Bio: Rick Riordan, dubbed “storyteller of the gods” by Publishers Weekly, is the author of five #1 New York Times best-selling middle grade series with millions of copies sold throughout the world: Percy Jackson and the Olympians, The Heroes of Olympus, and the Trials of Apollo, based on Greek and Roman mythology; the Kane Chronicles, based on Ancient Egyptian mythology; and Magnus Chase and the Gods of Asgard, based on Norse mythology. Rick collaborated with illustrator John Rocco on two #1 New York Times best-selling collections of Greek myths for the whole family: Percy Jackson’s Greek Gods and Percy Jackson’s Greek Heroes. His most recent book is Daughter of the Deep, a modern take on 20,000 Leagues Under the Sea. Rick is also the publisher of an imprint at Disney-Hyperion, Rick Riordan Presents, dedicated to finding other authors of highly entertaining fiction based on world cultures and mythologies. He lives in Boston, Massachusetts with his wife and two sons. Follow him on Twitter at @ReadRiordan.