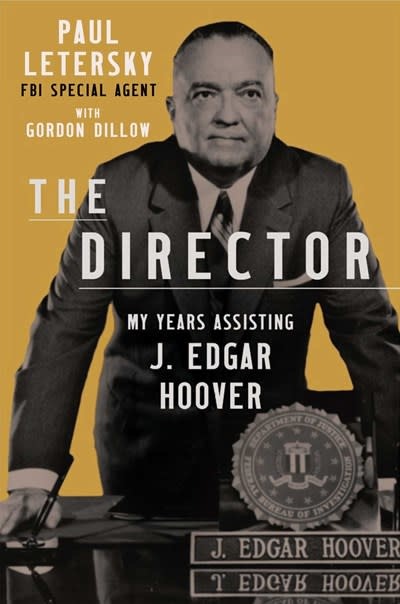 The first book ever written about FBI Director J. Edgar Hoover by a member of his own personal staff—his former assistant, Paul Letersky—offering unprecedented insight into an American legend.

The 1960s and 1970s were arguably among America’s most turbulent post-Civil War decades. While the Vietnam War continued seemingly without end, protests and riots ravaged most cities, the Kennedys and MLK were assassinated, and corruption found its way to the highest levels of politics with Watergate.

In 1965, in the midst of the chaos, twenty-two-year old Paul Letersky was assigned to assist the legendary FBI director J. Edgar Hoover who’d just turned seventy and had, by then, led the Bureau for an incredible forty-one years. Hoover was a rare and complex man who walked confidently among the most powerful. His personal privacy was more tightly guarded than the secret “files” that he carefully collected—and that were so feared by corrupt politicians. Through Letersky’s close working relationship with Hoover, and the trust and confidence he gained from Hoover’s most loyal senior assistant for decades, Helen Gandy, Paul became one of the few able to enter the Director’s secretive—and sometimes perilous—world.

Hoover, who would ultimately serve the country for forty-eight years, built the FBI into a professional crime-fighting organization unmatched by any nation. In his lifetime he was honored and feared, respected and denounced. Since his death half a century ago, millions of words have been written about him and hundreds of hours of TV dramas and A-list Hollywood films produced. But until now, there have been virtually no accounts from someone who, for a period of years, spent hours with the Director on a daily basis.

Balanced, honest, and keenly observed, The Director offers a unique inside look at one of the most powerful law enforcement figures in American history.

Paul Letersky is a former FBI agent whose early service included two years working directly for FBI Director J. Edgar Hoover as a personal assistant. Letersky would go on to become a Special Agent and participate in events that grabbed national headlines. After leaving the FBI, he became vice president of Pan American World Airways. Letersky lives in Oregon.

Gordon Dillow has been a reporter, columnist, and war correspondent for more than thirty years. He has written for a number of newspapers, including The Wall Street Journal and Los Angeles Times, and is the author or coauthor of numerous books. He lives in Scottsdale, Arizona.