Home » The End of the Golden Gate: Writers on Loving and (Sometimes) Leaving San Francisco 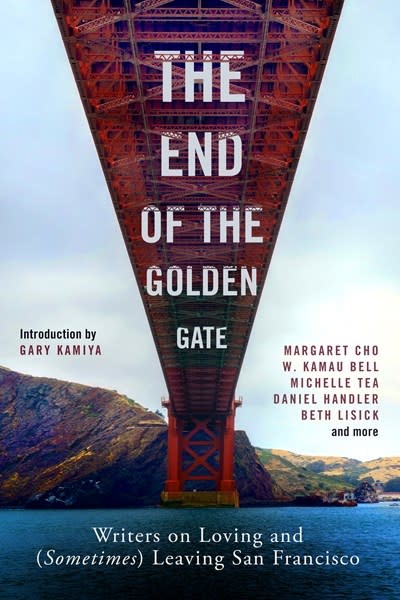 The End of the Golden Gate: Writers on Loving and (Sometimes) Leaving San Francisco

Capturing an ever-changing San Francisco, 25 acclaimed writers tell their stories of living in one of the most mesmerizing cities in the world.

Over the last few decades, San Francisco has experienced radical changes with the influence of Silicon Valley, tech companies, and more. Countless articles, blogs, and even movies have tried to capture the complex nature of what San Francisco has become, a place millions of people have loved to call home, and yet are compelled to consider leaving. In this beautifully written collection, writers take on this Bay Area-dweller's eternal conflict: Should I stay or should I go?

Including an introduction written by Gary Kamiya and essays from Margaret Cho, W. Kamau Bell, Michelle Tea, Beth Lisick, Daniel Handler, Bonnie Tsui, Stuart Schuffman, Alysia Abbott, Peter Coyote, Alia Volz, Duffy Jennings, John Law, and many more, The End of the Golden Gate is a penetrating journey that illuminates both what makes San Francisco so magnetizing and how it has changed vastly over time, shapeshifting to become something new for each generation of city dwellers.

With essays chronicling the impact of the tech-industry invasion and the evolution, gentrification, and radical cost of living that has transformed San Francisco's most beloved neighborhoods, these prescient essayists capture the lasting imprint of the 1960s counterculture movement, as well as the fight to preserve the art, music, and other creative movements that make this forever the city of love.

For anyone considering moving to San Francisco, wishing to relive the magic of the city, or anyone experiencing the sadness of leaving the bay—and ultimately, for anyone that needs a reminder of why we stay.

Bound to be a long-time staple of San Francisco literature, anyone who has lived in or is currently living in San Francisco will enjoy the rich history of the city within these pages and relive intimate memories of their own.

• GIVING BACK TO THE COMMUNITY: A percentage of the proceeds will be given to charities that help those in the bay experiencing homelessness. Every copy purchased offers a small way to help those in need.