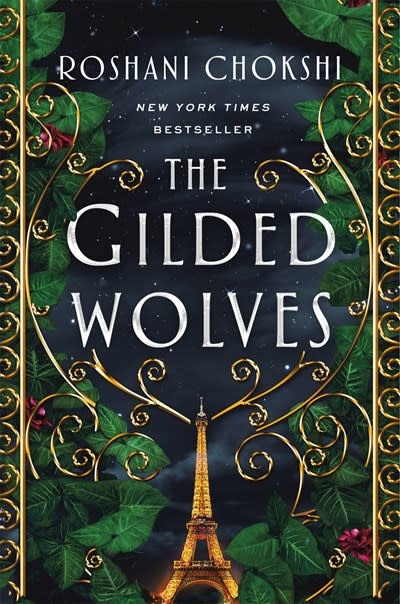 New York Times bestselling author Roshani Chokshi's The Gilded Wolves, set during a time of extraordinary change that is full of mystery, decadence, and dangerous desires, is now in paperback!

Paris, 1889: The world is on the cusp of industry and power, and the Exposition Universelle has breathed new life into the streets and dredged up ancient secrets. In this city, no one keeps tabs on secrets better than treasure-hunter and wealthy hotelier Séverin Montagnet-Alarie. But when the all-powerful society the Order of Babel seeks him out for help, Séverin is offered a treasure that he never imagined: his true inheritance. To find the ancient artifact the Order seeks, Séverin will need help from a band of experts:

An engineer with a debt to pay. A historian who can't yet go home. A dancer with a sinister past. And a brother in all but blood, who might care too much.

Together, they'll have to use their wits and knowledge to hunt the artifact through the dark and glittering heart of Paris. What they find might change the world, but only if they can stay alive.

ROSHANI CHOKSHI is the author of commercial and critically-acclaimed books for middle grade and young adult readers that transport audiences to fantastical worlds heavily inspired by world mythology and folklore. Her work has been nominated for the Locus and Nebula awards, and has frequently appeared on Best of The Year lists from Barnes and Noble, Buzzfeed and more. Her New York Times bestselling series include The Star-Touched Queen duology, The Gilded Wolves, and Aru Shah and The End of Time.