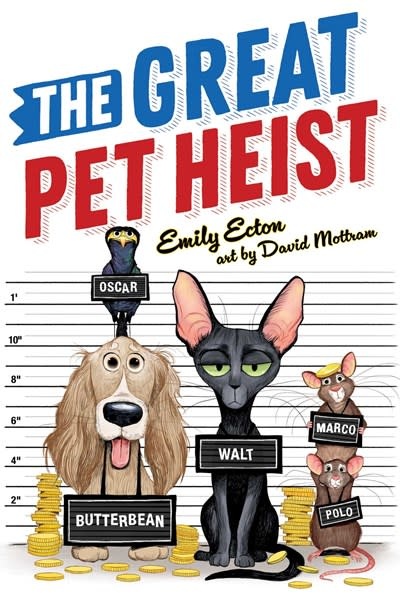 Ocean’s Eleven meets The Secret Life of Pets in this “classic caper” (Booklist) following a ragtag group of pets who will do whatever it takes to avoid being sent to the pound.

Butterbean knew she wasn’t always a good dog. Still, she’d never considered herself a BAD dog—until the morning that her owner, Mrs. Food, fell in the hallway. Admittedly the tile was slipperier than usual, mostly because Butterbean had just thrown up on it.

Now Butterbean and her fellow pets have to come up with a grand plan to support themselves in case Mrs. Food is unable to keep taking care of them. When they discover a mysterious man in their building who seems to have lots of loot, they plan a heist. Oscar the mynah bird is the brains of the operation. Walt the cat has the necessary slyness and slink. Marco and Polo are the reconnaissance rats. And Butterbean...well, no one would ever suspect a cute little wiener dog, right? Can these animal friends can pull off the heist of the century?

Emily Ecton is the author of The Great Pet Heist as well as a number of middle grade books published under the names Emily Ecton and Emily Fairlie. She is also a former writer and producer for “Wait, Wait…Don’t Tell Me!,” the Peabody Award­–winning comedy news quiz on NPR. She lives in Virginia, with Howdy, a law-abiding dog with no known criminal affiliations. Visit her at EmilyEcton.com.

Dave Mottram is an illustrator living in Ohio who worked as a graphic designer for many years, which led him to pursue his passion for illustration. He paints traditionally and digitally with color and layers and line. He loves tacos, animals, tikis, and nerding out over art supplies. Visit him at DaveMottram.com.