Home » The Greatest in the World! 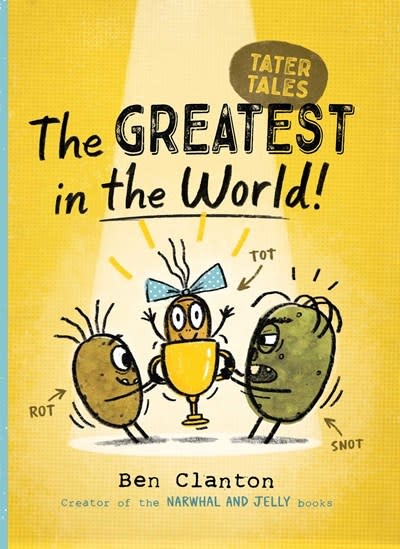 The Greatest in the World!

Two spud siblings face off in a series of epic challenges in this first installment of a new and hilariously silly graphic novel chapter book series from the bestselling creator of the Narwhal and Jelly books.

Rot is a mutant potato who wakes up feeling great, maybe even…the greatest in the world! But that only makes Rot’s brother Snot the grumpiest in the world. The only solution? An epic contest to prove who is the greatest once and for all, judged by the only impartial party they can find—their small fry little sister Tot.

But as the stakes get higher through the muddy potato sack race, sacred hot potato roll, and a hilarious laughing contest, their rivalry spirals out of control. Suddenly Rot’s not feeling so spudtacular anymore. Will this tater trio ever be able to determine who the greatest in the world really is?

Ben Clanton is an author and illustrator whose books include It Came in the Mail; Something Extraordinary; Rex Wrecks It!; Mo’s Mustache; The Table Sets Itself; Vote for Me!; Rot, the Cutest in the World!; and Rot, the Bravest in the World!. He lives with his wife and son in Seattle, Washington. Learn more at BenClanton.com.