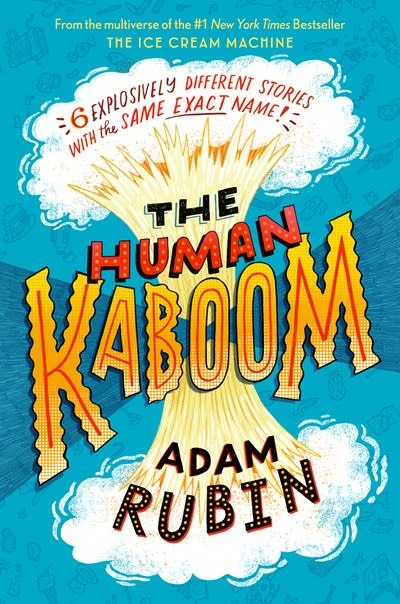 The author of the #1 New York Times bestsellers Dragons Love Tacos and The Ice Cream Machine returns with another hilarious, irresistible middle-grade collection of six totally different stories with the same exact name.

Adam Rubin is back with this companion to The Ice Cream Machine, inviting you into six thrilling new worlds filled with daring and danger, mystery and mayhem—not to mention explosions! In a swanky New York City hotel, a reclusive guest appears to have spontaneously combusted. On a school field trip to a human anatomy museum in space, two kids try to pull off the greatest prank in history. Somewhere on a deserted island, three siblings try to make a life for themselves after the rest of the planet has been decimated by gigantic rock monsters. And then there's the small, quaint fishing town where a boy visiting his sister stumbles across an ancient curse; the traveling circus where a young girl becomes the assistant to a death-defying human cannonball; and the rugged wilderness where one kid with superpowers just can't seem to find some peace.

Each story is illustrated by a different artist, including Marta Altés, Daniel Gray-Barnett, Rodolfo Montalvo, Daniel Salmieri, Adam de Souza, and Gracey Zhang, with black-and-white artwork that practically explodes off the page. So put on some protective eyewear and grab some earplugs, because this book is guaranteed to blow your mind!