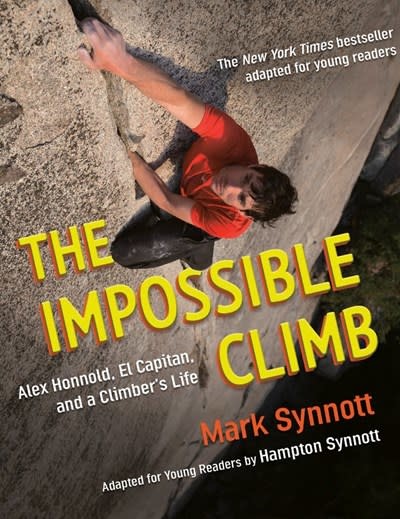 A middle grade adaptation of the adult bestseller that chronicles what The New York Times deemed “one of the great athletic feats of any kind, ever”: Alex Honnold’s free-solo ascent of El Capitan in Yosemite National Park.

On June 3, 2017, as seen in the Oscar-winning documentary Free Solo, Alex Honnold achieved what most had written off as unattainable: a 3,000-foot vertical climb of El Capitan in Yosemite National Park, without a rope or harness. At the time, only a few knew what he was attempting to do, but after topping out at 9:28 am, having spent just under four hours on this historic feat, author Mark Synnott broke the story for National Geographic and the world watched in awe.

Now adapted for a younger audience, The Impossible Climb tells the gripping story of how a quiet kid from Sacramento, California, grew up to capture the attention of the entire globe by redefining the limits of human potential through hard work, discipline, and a deep respect for the natural world.

Mark Synnott is a twenty-year member of the North Face Global Athlete team. He is a frequent contributor to National Geographic magazine and has written for Outside, Men’s Journal, Rock and Ice, and Climbing. He is also an internationally certified mountain guide and a trainer for the pararescuemen of the United States Air Force. He lives in the Mt. Washington Valley of New Hampshire.

Hampton Synnott lives in the moutains of New Hampshire with her family. She has spent the last twenty years working in sales for various companies in the ski, bike, fishing, and climbing industries in the United States and New Zealand. She loves nothing more than to travel with her family and divides her time between the mountains and the sea.