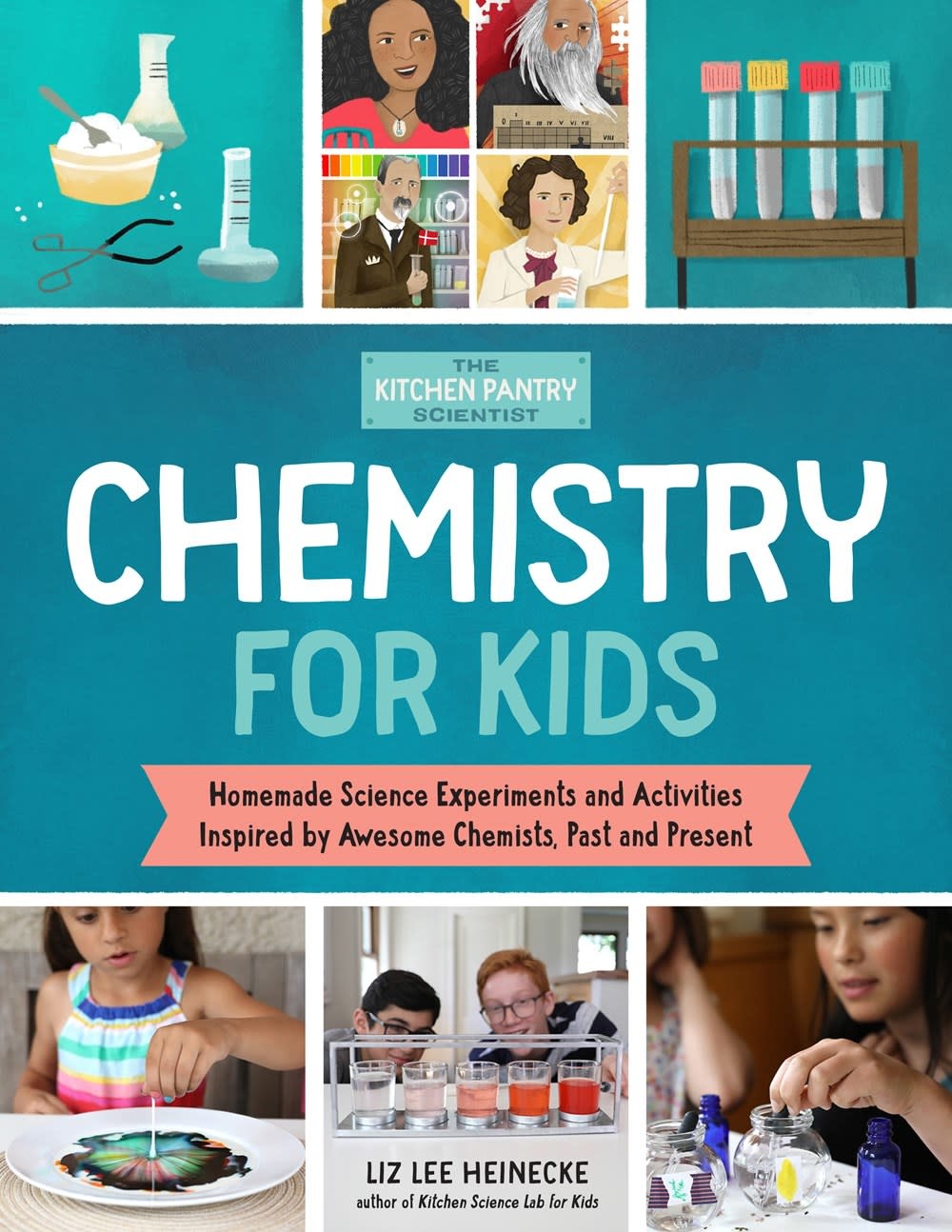 Kitchen Pantry Scientist: Chemistry for Kids features biographies of 25 leading chemists, past and present, accompanied by accessible, hands-on experiments and activities to bring the history and principles of chemistry alive.

Replicate a chemical reaction similar to one Marie Curie used to purify radioactive elements! Distill perfume using a method created in ancient Mesopotamia by a woman named Tapputi! Aspiring chemists will discover these and more amazing role models and memorable experiments in Chemistry for Kids, the debut book of The Kitchen Pantry Scientist series.

This engaging guide offers a series of snapshots of 25 scientists famous for their work with chemistry, from ancient history through today. Each lab tells the story of a scientist along with some background about the importance of their work, and a description of where it is still being used or reflected in today’s world.

A step-by-step illustrated experiment paired with each story offers kids a hands-on opportunity for exploring concepts the scientists pursued, or are working on today. Experiments range from very simple projects using materials you probably already have on hand, to more complicated ones that may require a few inexpensive items you can purchase online. Just a few of the incredible people and scientific concepts you'll explore:

Make soap from soap base, oil, and citrus peels.

Carbonate a beverage using CO2 from yeast or baking soda and vinegar mixture.

Make a battery using a series of lemons and use it to light an LED.

People have been tinkering with chemistry for thousands of years. Whether out of curiosity or by necessity, Homo sapiens have long loved to play with fire: mixing and boiling concoctions to see what interesting, beautiful, and useful amalgamations they could create. Early humans ground pigments to create durable paint for cave walls, and over the next 70 thousand years or so as civilizations took hold around the globe, people learned to make better medicines and discovered how to extract, mix, and smelt metals for cooking vessels, weapons, and jewelry. Early chemists distilled perfume, made soap, and perfected natural inks and dyes.

Modern chemistry was born around 250 years ago, when measurement, mathematics, and the scientific method were officially applied to experimentation. In 1896, after the first draft of the periodic table was published, scientists rushed to fill in the blanks. The elemental discoveries that followed gave scientists the tools to visualize the building blocks of matter for the first time in history, and they proceeded to deconstruct the atom. Since then, discovery has accelerated at an unprecedented rate. At times, modern chemistry and its creations have caused heartbreaking, unthinkable harm, but more often than not, it makes our lives better.

With this fascinating, hands-on exploration of the history of chemistry, inspire the next generation of great scientists.

Liz Lee Heinecke has loved science since she was old enough to inspect her first butterfly. After working in molecular biology research for 10 years and earning her master’s degree, she left the lab to kick off a new chapter in her life as a stay-at-home mom. Soon, she found herself sharing her love of science with her three kids as they grew, chronicling their science adventures on her KitchenPantryScientist website. Her desire to share her enthusiasm for science led to regular television appearances, an opportunity to serve as an Earth Ambassador for NASA, and the creation of an iPhone app. Her goal is to make it simple for parents to do science with kids of all ages, and for kids to experiment safely on their own. Liz graduated from Luther College and received her master’s degree in bacteriology from the University of Wisconsin, Madison. She is the author of Kitchen Science Lab for Kids, Kitchen Science Lab for Kids: Edible Edition, Outdoor Science Lab for Kids, STEAM Lab for Kids, Little Learning Labs: Kitchen Science for Kids, and The Kitchen Pantry Scientist: Chemistry for Kids.