Home » Once Upon a Tim 02 The Labyrinth of Doom 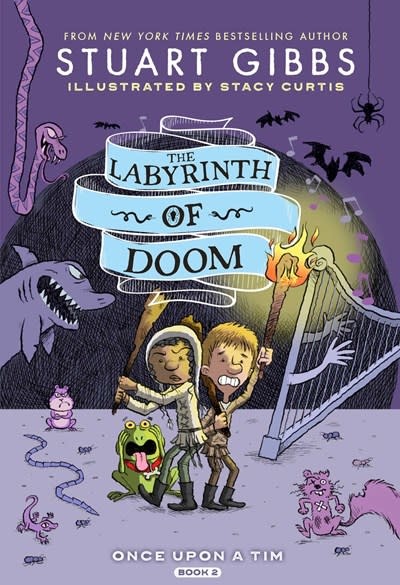 Once Upon a Tim 02 The Labyrinth of Doom

Knight-in-training Tim and his best friend, Belinda, embark on a quest to save Princess Grace in this second book in the hilarious, highly illustrated Once Upon a Tim middle grade series from New York Times bestselling author Stuart Gibbs.

Prince Ruprecht is VERY UPSET that knights-in-training, Tim and Belinda, have thwarted his plans and ruined his chances with Princess Grace. And so, to get even, he has kidnapped the princess and trapped her in the most complicated, dangerous, complex, dastardly, biggest (okay you get the point)…and scariest maze in all the world!

Now it’s up to Tim, Belinda, Ferkle, and Rover to fend off menacing beasts (like the minotaur), conquer treacherous obstacles (like chasms filled with cave sharks), find their way through the labyrinth (which is very tricky), and rescue the princess before time runs out. Oh, and also they need to remember how to get back out again…or they’ll be trapped inside the maze forever.

Stacy Curtis is the illustrator of The 7 Habits of Happy Kids series by Sean Covey and the Once Upon a Tim series by bestselling author Stuart Gibbs. He lives with his wife and dog in Oak Lawn, Illinois.