Home » The Lady's Guide to Petticoats and Piracy 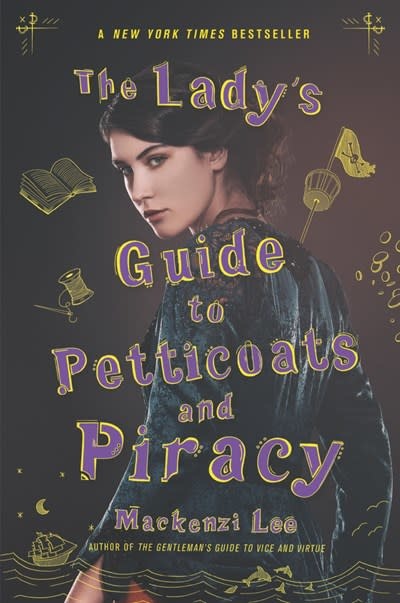 The Lady's Guide to Petticoats and Piracy

In this swashbuckling sequel to the New York Times bestselling and Stonewall Honor–winning queer historical fantasy novel The Gentleman’s Guide to Vice and Virtue, Felicity Montague must use all her womanly wits and wiles to achieve her dreams of becoming a doctor and avoid life as a society wife—even if she has to turn to a life of crime to do it. Now in paperback.

Felicity Montague is through with pretending she prefers society parties to books about bonesetting—or that she’s not smarter than most people she knows, or that she cares about anything more than her dream of becoming a doctor.A year after an accidentally whirlwind tour of Europe, which she spent evading highwaymen and pirates with her brother, Monty, Felicity has returned to England with two goals in mind—avoid the marriage proposal of Callum Doyle, a lovestruck suitor from Edinburgh, and enroll in medical school. However, her intellect and passion will never be enough in the eyes of the administrators, who see men as the sole guardians of science.But then a small window of hope opens. Dr. Alexander Platt, an eccentric physician who Felicity idolizes, is looking for research assistants, and Felicity is sure that someone as forward-thinking as her hero would be willing to take her on. However, Platt is in Germany, preparing to wed Felicity’s estranged childhood friend Johanna. Not only is Felicity reluctant to open old wounds, but she also has no money to make the trip.Luckily, a mysterious young woman is willing to pay Felicity’s way, so long as she’s allowed to travel with Felicity, disguised as her maid. In spite of her suspicions, Felicity agrees, but once the girl’s true motives are revealed, Felicity becomes part of a perilous quest that leads them from the German countryside to the promenades of Zurich to secrets lurking beneath the Atlantic.

Mackenzi Lee is the New York Times bestselling author of This Monstrous Thing, The Gentleman’s Guide to Vice and Virtue, and The Lady’s Guide to Petticoats and Piracy. She earned a BA in history and an MFA from Simmons College in writing for children and young adults. She currently calls Salt Lake City home.