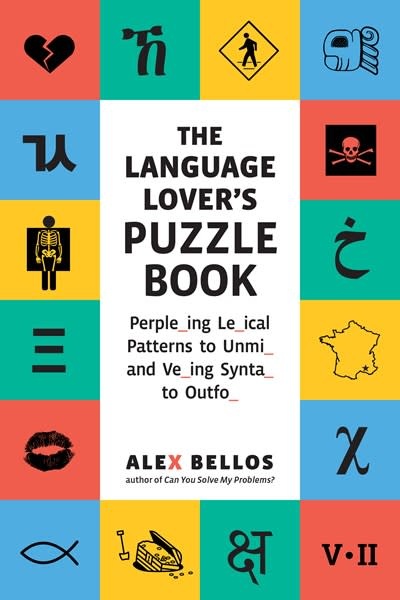 100 wonder-filled word puzzles that thrill and tantalize with the beauty, magic, and weirdness of world language

Whether you’re a crossword solver, cryptogram fan, Scrabble addict, or Sudoku savant, The Language Lover’s Puzzle Book is guaranteed to tease your brain and twist your tongue. Puzzle master Alex Bellos begins in Japan, where we can observe some curious counting:

Now, how do the Japanese say “nine cucumbers”?*

Bellos finds the intrigue—and the human element—in a dizzying array of ancient, modern, and even invented tongues, from hieroglyphs to Blissymbolics, Danish to Dothraki. Filled with unusual alphabets, fascinating characters, and intriguing local customs for time-telling, naming children, and more, this is a bravura book of brainteasers and beyond—it’s a globe-trotting, time-traveling celebration of language.

*The word endings depend on shape: Flat things end in -mai and spherical things end in -ko. Cucumbers are long things (like ropes and legs), so they end in -hon. The answer is (a)!

Alex Bellos holds a degree in mathematics and philosophy from Oxford University. His bestselling books, Here's Looking at Euclid and The Grapes of Math, have been translated into more than 20 languages and were both shortlisted for the Royal Society Science Book prize. His puzzle books include Can You Solve My Problems?, Puzzle Ninja, Perilous Problems for Puzzle Lovers, and The Language Lover's Puzzle Book. He is also the coauthor of the mathematical coloring books Patterns of the Universe and Visions of the Universe. He has launched an elliptical pool table, LOOP. He writes a puzzle blog for The Guardian, and he won the Association of British Science Writers award for best science blog in 2016. He lives in London.