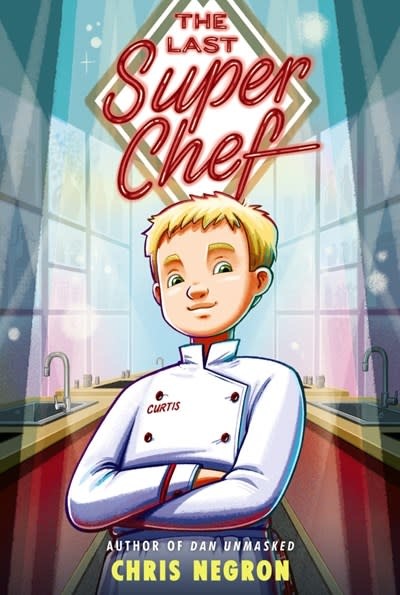 A cooking competition sets the scene for a young chef to finally come face-to-face with his father in this thoughtful middle grade story—perfect for fans of John David Anderson and Antony John.

For as long as he can remember, Curtis Pith has been obsessed with becoming a chef like Lucas Taylor, host of The Super Chef. And Curtis has a secret: Taylor is actually his long-absent father.So when Taylor announces a kids-only final season of Super Chef, Curtis finally sees his chance to meet his dad. But after Curtis wins a spot in the competition and arrives in New York to film the show, nothing goes as smoothly as he expected.It’s all riding on the last challenge. If Curtis cooks his heart out like he knows he can, he just might go home with the top prize—and the truth. Family and food take center stage in this heartfelt middle grade story that handles the complexity of family and identity in an accessible, kind way.

Chris Negron grew up outside Buffalo, NY, where he spent a huge chunk of his childhood collecting comic books and loving sports. But it was the hours of playing Dungeons and Dragons in friends' basements that first gave him the dream of one day writing his own stories. That dream kept him company through college at Yale University and years of programming computers for big companies. He is the author of Dan Unmasked and The Last Super Chef, and he now lives outside Atlanta with his wife, Mary. Visit him at www.chrisnegron.com.