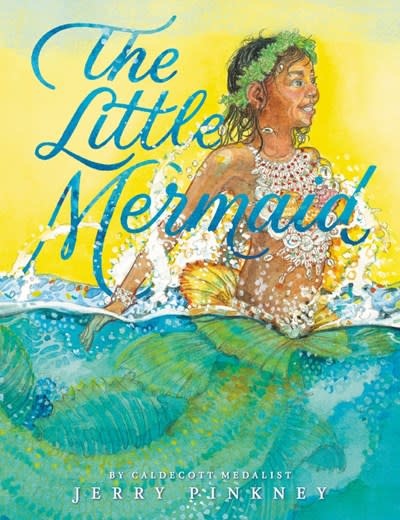 In this captivating reimagining of Hans Christian Andersen's classic, Caldecott medalist and bestselling artist Jerry Pinkney conjures a poignant friendship story and an epic tale of redemption -- the definitive new version for our time.

Melody, the littlest sea princess, is not content just to sing in the choir of mermaids like her sisters. She is an explorer who wonders about what lies above the water's surface . . . especially the young girl she has spied from a distance. To meet her requires a terrible sacrifice: she trades her beautiful voice for a potion that gives her legs, so that she may live on land instead. It seems like a dream come true at first. But when trouble stirs beneath the ocean, Melody faces another impossible choice -- stay with her friend, or reclaim her true identity and save her family.

Legendary artist Jerry Pinkney's singular reinvention of this tale about love and sacrifice empowers young, twenty-first century girls with the strong message that "you should never give up your voice . . . for anyone."

Jerry Pinkney is one of the most heralded children's book illustrators of all time and has illustrated more than 100 books. He has the rare distinction of being the recipient of five Caldecott Honors and the winner of the 2010 Caldecott Medal for The Lion and the Mouse, and has since created several companion books: The Tortoise & the Hare, The Grasshopper & the Ants, The Three Billy Goats Gruff, and The Little Mermaid.

He has won the Coretta Scott King Illustrator Award five times and the Coretta Scott King Illustrator Honor four times. Jerry has received several major lifetime achievement awards and was also the first children's book illustrator elected to the American Academy of Arts and Sciences. He lives with his wife, author Gloria Jean Pinkney, in Croton-on-Hudson, New York. The artist invites you to visit his website at jerrypinkneystudio.com.