Home » The Magnolia Bakery Handbook: A Complete Guide for the Home Baker 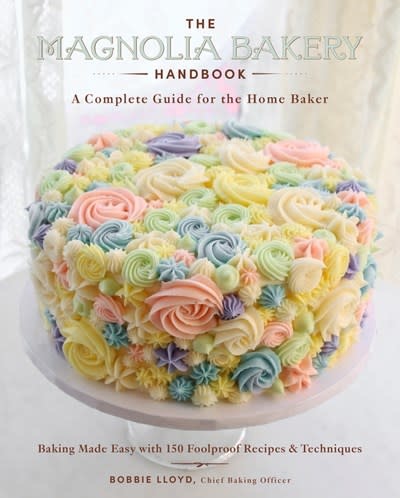 The Magnolia Bakery Handbook: A Complete Guide for the Home Baker

Published in celebration of Magnolia Bakery on the eve of its twenty-fifth anniversary, a beautifully photographed book offering nearly 150 scrumptious recipes and tips, tools, and techniques accompanied by 250 photographs and illustrations destined to be the favorite resource for the home baker.

When it opened its doors in 1996, Magnolia Bakery quickly became a landmark and destination in New York City. Fans lined up around the block to get a taste of the shop’s freshly-baked cupcakes, cakes, banana pudding, cheesecakes and much more. Today, Magnolia Bakery can be found in New York City, Boston, Los Angeles, Chicago, Washington, D.C., Dubai, Manila, and Bangalore. Bobbie Lloyd, Magnolia Bakery’s Chief Baking Officer, has played a critical role in maintaining the company’s reputation for handmade baked goods, and its authenticity and excellence throughout its growth. Bobbie has worked to update its classic treats, introduced new temptations, and carefully expanded the business both online and in new locations across New York and the world.The Magnolia Bakery Handbook is the first book Magnolia Bakery has published since the business was sold by the founders in 2007. Gorgeously designed, filled with irresistible creations, it is sure to become an essential staple for home bakers. Along with almost 150 recipes, all beautifully photographed, Bobbie shares hundreds of tips, tricks, techniques, and must-have tools for successful baking. Inside you’ll find everything you need to make the classic desserts of Magnolia Bakery at home, with chapters on: CakesCupcakesFrom the Cookie JarBrownies and BarsPies and CrispsMuffinsScones and Coffee CakesIce Box DessertsBanana PuddingButtercreams, Fillings and IcingsCrumbs and CrustsCake Decorating 101A Conversion Chart Whether you have a craving for Magnolia Bakery’s popular banana pudding, classic icebox cake, or their rich double fudge brownie, The Magnolia Bakery Handbook shows you how to make it and bake it right.

Bobbie Lloyd is Chief Baking Officer at Magnolia Bakery, where she has played an integral role in expanding the bakery from its original location in New York City’s West Village to its multiple locations around the world. She brings the homemade essence of Magnolia Bakery for customers through the creation and development of new recipes and perfection of old favorites. Born and raised in the Chicago area, Lloyd began her epicurean journey at eight with her first cooking class. She cultivated this interest through her formal education at Chef's and Company in Boston and working in restaurants. Throughout her career she has been involved in all aspects of the restaurant and bakery business. She lives in New York City.