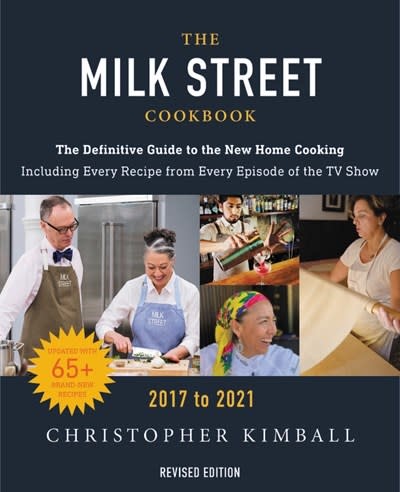 The complete Milk Street TV show cookbook, featuring each dish from every episode and more -- nearly 400 dishes in all, including 65+ new recipes from the 2020-2021 fourth season.

Now featuring nearly 400 tried-and-true recipes, including every recipe from every episode of the TV show, this book is the ultimate guide to high-quality, low effort cooking and the perfect kitchen companion for cooks of all skill levels.

At Milk Street, there are no long lists of hard-to-find ingredients, strange cookware, or all day methods. Instead, every recipe has been adapted and tested for home cooks like you. You'll find simple recipes that deliver big flavors and textures fast, such as:Stir-Fried Chicken with Snap Peas and BasilCacio e PepeNo-Sear Lamb or Beef and Chickpea StewSomali Chicken SoupRoasted Cauliflower with Miso GlazeFrench Apple CakeAnd Central Mexican Guacamole and Israeli Hummus -- classics with a twist!Organized by type of dish -- from salads, soups, grains, and vegetable sides to simple dinners and extraordinary desserts -- this book is an indispensable reference that will introduce you to extraordinary new flavors and ingenious techniques.