Home » The Not BAD Animals 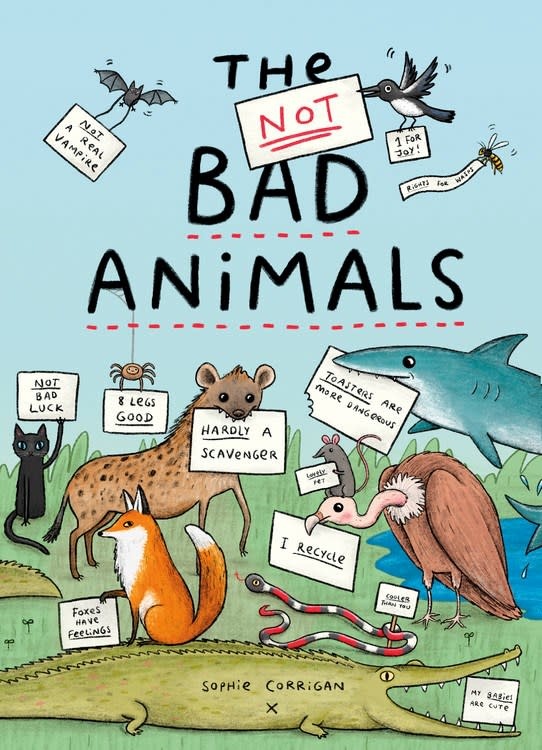 The Not BAD Animals

A funny non-fiction book starring misunderstood animals from around the world. Children will learn facts about a collection of different creatures as Sophie Corrigan’s unique artwork and hilarious text dispels facts about animals who have been given a bad rep!

We all have a certain creature that makes our skin scrawl and give us the ‘heebie jeebies’. Spiders that make us scream, mice that make us jump on top of furniture until the coast is clear, or bats that make us shudder at the thought of them flapping around our hair. There are creatures big and small all over the world that make us squirm and wriggle in our seats just at the mere thought of them.But what did these animals ever do to deserve such a bad reputation? Most of the time it’s humans that have labelled them ugly, dangerous and downright gross. But it’s one false acquisition too many for these little guys. They’ve had enough of being called scary, slimy, nasty and ewwy. They’re here to dispel these false acquisitions and set the record straight once and for all!"You humans have given us a BAD rep! You've been spreading rumours about us - you think we're scary and spooky and dangerous and icky. Well we're here to set the record straight because we're fed up with the lies you've been spreading. We're not bad animals at all -we're just misunderstood!"With laugh-out-loud illustrations from the immensely talented Sophie Corrigan, uncover the truth behind the animal and learn all about how each creature plays an important role in our world. With bitesize text that will leave you giggling and a fact box about each misrepresented creature, this is the perfect introduction to over 30 critters big and small who really aren’t all that bad at all!

Sophie Corrigan is a full-time freelance illustrator based in the UK. She graduated from University of Central Lancashire in 2013 with a first class degree in Illustration, and has recently completed a Masters degree in Children’s Book Illustration, for which she received a Distinction.