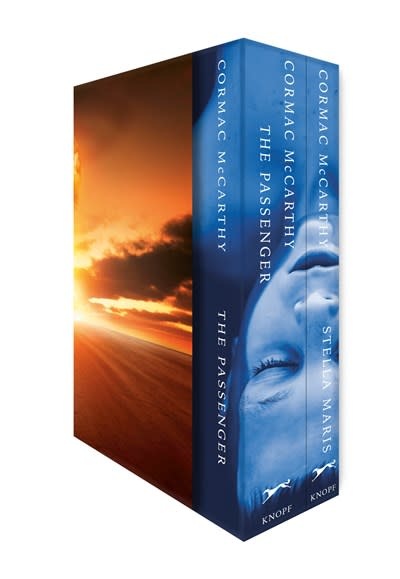 The best-selling, Pulitzer Prize–winning author of The Road returns with a two-volume masterpiece in an artfully designed box set. The Passenger is a fast-paced and sprawling novel while Stella Maris is a tightly controlled coda, told entirely in dialogue. Together they relate the thrilling story of a brother and sister, haunted by loss, pursued by conspiracy, and longing for a death they cannot reconcile with God.

The Passenger 1980, PASS CHRISTIAN, MISSISSIPPI: It is three in the morning when Bobby Western, a salvage diver, zips the jacket of his wet suit and plunges from the boat deck into darkness. His dive light illuminates the sunken jet, nine bodies still buckled in their seats, hair floating, eyes devoid of speculation. Missing from the crash site are the pilot’s flight bag, the plane’s black box, and the tenth passenger. But how? A collateral witness to machinations that can only bring him harm, Western is shadowed in body and spirit—by men with badges; by the ghost of his father, inventor of the bomb that melted glass and flesh in Hiroshima; and by his sister, the love and ruin of his soul. Stella Maris 1972, BLACK RIVER FALLS, WISCONSIN: Alicia Western is twenty years old when she arrives at a psychiatric facility with forty thousand dollars in a plastic bag. A doctoral candidate in mathematics at the University of Chicago, Alicia has been diagnosed with paranoid schizophrenia, and she does not want to talk about her brother, Bobby. Instead, she contemplates the nature of madness, the human insistence on one common experience of the world; she surveys the intersection of physics and philosophy; and she introduces her cohorts, her chimeras, the hallucinations that only she can see. All the while, she grieves for Bobby, not quite dead, not quite hers. Look for The Passenger, the first volume in The Passenger series, on sale October 25th, 2022; and Stella Maris, the second volume, on sale December 6th, 2022

Series Overview: COLLECTOR’S ITEM: Chip Kidd has designed a gorgeous box set that readers will want to buy for its aesthetic qualities as much as the content. This will be a must-have for Cormac McCarthy fans and is a perfect gift for a reader (and yourself).PUBLISHING MOMENT: Fans have been waiting more than a decade for new work by McCarthy after he won the Pulitzer Prize in 2007. The arrival of not one but two novels published simultaneously around the world will make this landmark publication even more thrilling. We expect a tidal wave of media attention; this will be covered by all of the major outlets and have a massive publicity rollout.THE ROAD: McCarthy’s most recent novel sold more than 3 million copies, spawned an entire genre of postapocalyptic literary fiction, became a major motion picture, was selected by Oprah’s Book Club, and won the Pulitzer Prize.CULTURAL ICON: McCarthy is considered by many to be America’s greatest living novelist. In addition to the Pulitzer, his work has been honored with the National Book Award, the National Book Critics Circle Award, and an Academy Award. Rarely has an author so captured the public’s imagination and invited such a passionate following.

The novels of the American writer Cormac McCarthy have received a number of literary awards, including the Pulitzer Prize, the National Book Award, and the National Book Critics Circle Award. His works adapted to film include All the Pretty Horses, The Road, and No Country for Old Men—the latter film receiving four Academy Awards, including the award for Best Picture.