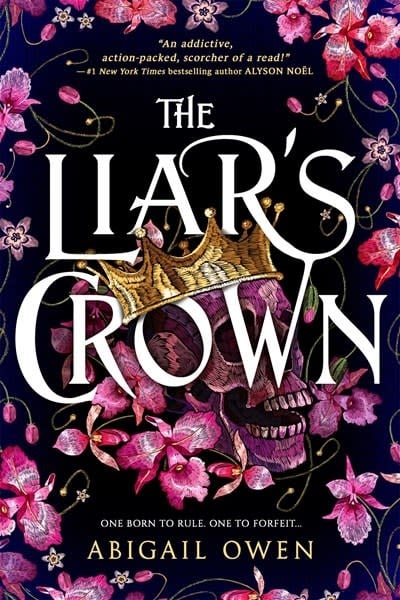 Beauty and the Beast meets Snow White in this upper YA fantasy where a black heart is disguised by beauty, the purest soul is hidden within a beast, and a gift of hope is laced with death.

Everything about Meren’s life is a lie. As a hidden twin princess, born second, she has only one purpose—to sacrifice her life for her beloved sister if death comes for her. Meren has lived under the guise of a poor, obscure girl of no standing, slipping into the palace and into the role of the true princess when danger is present.

Now the queen is dead, their dominion under threat of eternal winter, and the sinister King Erebos has sent her sister a flower. The first seen in a thousand years. With that gift, he seeks to wed her. Untrusting, Meren does what she was born to do and secretly takes her sister’s place on the eve of the coronation.

Which is why, when a man made of shadow kidnaps the new queen…he gets Meren by mistake.

As Meren tries to escape, all the lies start to unravel. Not just her lies. The Shadow Ranger who took her has secrets of his own. He struggles to contain the shadows he wields—other faces, hideous faces, that terrify her.

Winter is at the walls. Darkness is looming. And the only way to save them all is to kill Erebos. But to kill the king is to destroy the king, including the only good piece of his soul left—the Shadow Ranger who has stolen Meren’s heart.

Multi-award-winning author Abigail Owen writes adult paranormal romance and upper YA fantasy romance. She loves plots that move hot and fast, feisty heroines with sass, heroes with heart, a dash of snark, and oodles of HEAs! Other titles include wife, mother, Star Wars geek, eMBA, Texan, Aggie, and chocoholic. Abigail currently resides in Austin, Texas, with her own swoon-worthy hero husband and their angelic (mostly) kids, who are growing up way too fast. abigailowen.com