Home » The Queens of Animation: The Untold Story of the Women Who Transformed the World of Disney & Made Cinematic History 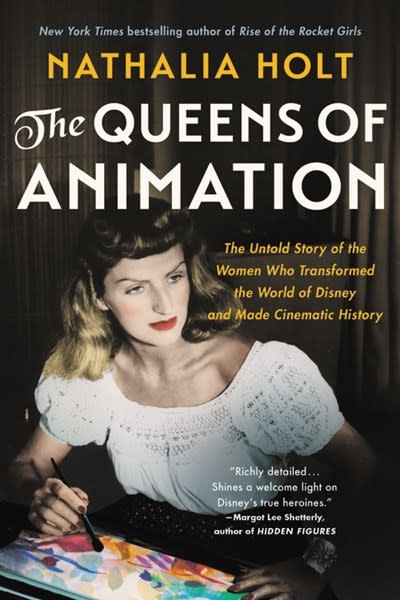 The Queens of Animation: The Untold Story of the Women Who Transformed the World of Disney & Made Cinematic History

From Snow White to Moana, from Pinocchio to Frozen, the animated films of Walt Disney Studios have moved and entertained millions. But few fans know that behind these groundbreaking features was an incredibly influential group of women who fought for respect in an often ruthless male-dominated industry and who have slipped under the radar for decades.

In The Queens of Animation, bestselling author Nathalia Holt tells their dramatic stories for the first time, showing how these women infiltrated the boys' club of Disney's story and animation departments and used early technologies to create the rich artwork and unforgettable narratives that have become part of the American canon. As the influence of Walt Disney Studios grew -- and while battling sexism, domestic abuse, and workplace intimidation -- these women also fought to transform the way female characters are depicted to young audiences.

With gripping storytelling, and based on extensive interviews and exclusive access to archival and personal documents, The Queens of Animation reveals the vital contributions these women made to Disney's Golden Age and their continued impact on animated filmmaking, culminating in the record-shattering Frozen, Disney's first female-directed full-length feature film.

Nathalia Holt, Ph.D. is the New York Times bestselling author of Rise of the Rocket Girls: The Women Who Propelled Us, from Missiles to the Moon to Mars and Cured: The People who Defeated HIV. Her writing has appeared in numerous publications including the New York Times, the Los Angeles Times, The Atlantic, Slate, Popular Science, and Time. She is a former Fellow at the Ragon Institute of Massachusetts General Hospital, MIT, and Harvard University. She lives with her husband and their two daughters in Pacific Grove, California.