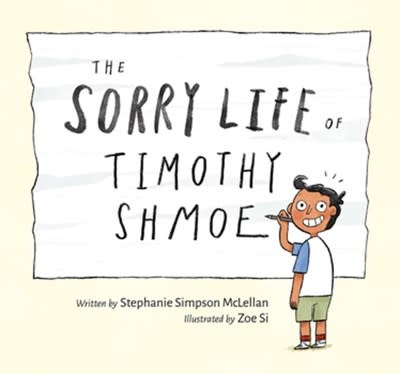 The Sorry Life of Timothy Shmoe

An impulsive little boy experiences the power of unconditional love

An impulsive little boy experiences the power of unconditional love

Timothy Shmoe isn’t a bad kid, but sometimes he makes honest (and not-so-honest) mistakes. Time after time, Timothy finds himself in disasters of his own creation, leaving a trail of broken heirlooms, torn tutus, and innocent bystanders (including his cat, Fluffy).

Told in a series of letters, readers follow Timothy through his hilarious antics and missteps. When his pocketful of marbles wreaks havoc at his sister’s ballet recital, Timothy realizes he’s gone too far. In one final, remorseful letter, Timothy apologizes for the ballet blunder and says his father probably wishes Timothy had never been born. What follows is a touching lesson about the redeeming power of acceptance.

Bright, comic-like illustrations and hand-lettered text bring Timothy and his shenanigans to life. Hilarious and heartwarming, The Sorry Life of Timothy Shmoe is a call to empathy for children who struggle with impulse control, and a tribute to unconditional love.

STEPHANIE SIMPSON MCLELLAN is an award-winning author of five picture books for children. She has also been a children's book reviewer and is a popular presenter at schools across Canada. Stephanie lives in Newmarket, Ontario.ZOE SI is a cartoonist, illustrator, and lawyer who has been drawing since she was old enough to hold a pencil. She has illustrated children's books, and her cartoons appear online and in print magazines including Geist and The New Yorker. She lives in Vancouver, British Columbia.