Home » The Mirror Visitor Quartet #4 The Storm of Echoes 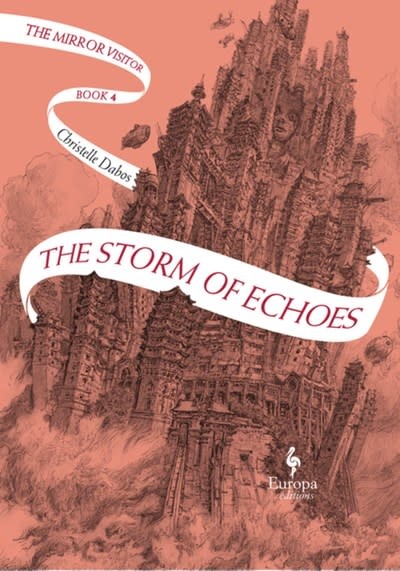 The Mirror Visitor Quartet #4 The Storm of Echoes

“A hallucinatory marriage of Pride and Prejudice and A Game of Thrones.”—Matthew Skelton, author of the Endymion Spring booksIn this gripping finale to Christelle Dabos’s international best-selling Mirror Visitor saga, Ophelia, the mirror-traveling heroine, and Thorn discover that the truth they have been seeking has always been hidden behind the mirror.Christelle Dabos takes us on a journey to the heart of a great game to which the all-too-human affairs of her book’s protagonists are ominously connected.The distrust between them has been overcome and now Ophelia and Thorn love each other passionately. However, they must keep their love hidden. Only in this way can they continue their journeys toward an understanding of the indecipherable code of God and the truth behind the mysterious figure of the Other, whose devastating power continues to bring down entire pieces of arks, plunging thousands of innocents into the void.Ophelia and Thorn arrive at the observatory of the Deviations, an institute shrouded in absolute secrecy and overseen by a sect of mystical scientists who secretly conduct terrifying experiments. There, Ophelia and Thorn hope to discover truths that will halt the destruction and death and bring the world back into balance.

Christelle Dabos was born on the Côte d'Azur in 1980 and grew up in a home filled with classical music and historical games. She now lives in Belgium. A Winter's Promise, her debut novel, won the Gallimard Jeunesse-RTL-Télérama First Novel Competition in France, and was named a Best Book of the Year by critics and publications in the US, including Entertainment Weekly, Bustle, Publishers Weekly, and Chicago Review of Books. A Winter's Promise was also named the #1 Sci-Fi/Fantasy title of the year by the editors of the Amazon Book Review.Since graduating in French from Oxford University, Hildegarde Serle has worked in London as a newspaper subeditor, mainly on The Independent and The Sunday Telegraph. In 2011, she decided to combine her love of both English and French by doing the Chartered Institute of Linguists Diploma in Translation. Although she lives in London, her heart still lives on the Quai aux Fleurs in Paris.