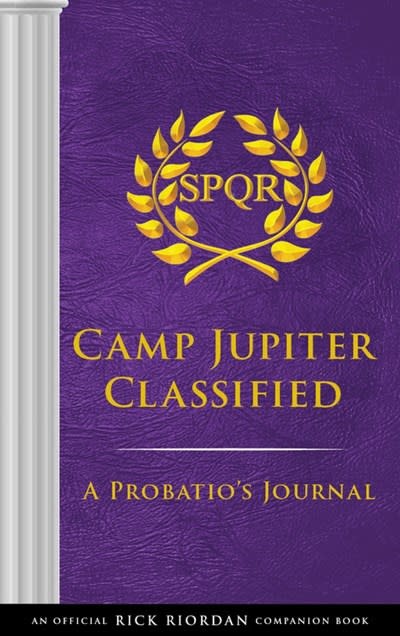 Catalog Copy: It's the February after Gaea's defeat, and mysterious incidents are wreaking havoc throughout Camp Jupiter. If the Romans don't figure out who--or what--is behind the episodes soon, the Twelfth Legion could implode. Suspicion falls on Claudia, the Fourth Cohort's newest probatio. After all, the mischief started shortly after she stumbled into camp. Plus, she's a daughter of Mercury, the god of thieves and tricksters. To find out whether she's guilty or innocent, readers can delve into the pages of Claudia's personal journal. Through her eyewitness accounts, they will visit the crime scenes--a row of seats in the Coliseum, an underground aqueduct tunnel, the strange staircase at the back of the principia--and see the bizarre events unfold. They'll be right alongside Claudia when she discovers a secret so ancient that not even the lares know about it . . . a secret that holds the key to Camp Jupiter's safety.

Author Bio: Rick Riordan, dubbed “storyteller of the gods” by Publishers Weekly, is the author of five #1 New York Times best-selling middle grade series with millions of copies sold throughout the world: Percy Jackson and the Olympians, The Heroes of Olympus, and the Trials of Apollo, based on Greek and Roman mythology; the Kane Chronicles, based on Ancient Egyptian mythology; and Magnus Chase and the Gods of Asgard, based on Norse mythology. Rick collaborated with illustrator John Rocco on two #1 New York Times best-selling collections of Greek myths for the whole family: Percy Jackson’s Greek Gods and Percy Jackson’s Greek Heroes. Rick is also the publisher of an imprint at Disney-Hyperion, Rick Riordan Presents, dedicated to finding other authors of highly entertaining fiction based on world cultures and mythologies. He lives in Boston, Massachusetts with his wife and two sons. Follow him on Twitter at @camphalfblood.