Home » The Tyranny of Merit: Can We Find the Common Good? 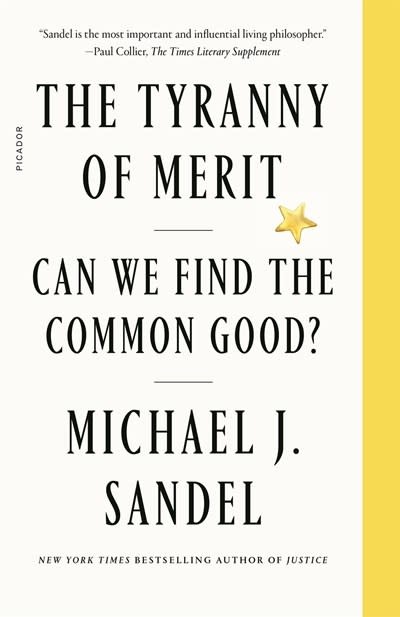 The Tyranny of Merit: Can We Find the Common Good?

The world-famous political philosopher and the bestselling author of Justice reveals the driving force behind the resurgence of populism: the tyranny of the meritocracy and the resentments it produces

Our politics are fraught with rancor and resentment. Decades of rising inequality and stalled mobility have fueled a populist revolt against elites. But while the pundits focus on wages and jobs, they are missing a big part of the story: social esteem, and the broader moral dimensions of our current crisis.

In recent decades, mainstream politicians across the aisle—from Reagan to Obama—have offered a rhetoric of rising: everyone should be given an equal chance to get ahead. But the relentless focus on "equal opportunity" ignores the morally corrosive attitudes that even a fair meritocracy generates. Among the winners, it generates hubris; among the losers, humiliation. Meritocratic hubris reflects the tendency of winners to inhale too deeply of their success, to forget the luck and good fortune that helped them on their way. It diminishes our capacity to see ourselves as sharing a common fate and leaves little room for the solidarity that can arise when we reflect on the contingency of our talents and fortunes. More than a protest against immigrants, outsourcing, and stagnant wages, the populist complaint is about the tyranny of merit. And the complaint is justified.

In The Tyranny of Merit, a searing critique of contemporary public discourse, Michael J. Sandel, “the world’s most relevant living philosopher” (Newsweek), diagnoses our political moment by seeking out its moral underpinnings. He highlights the hubris a meritocracy fosters among the winners and the indignities it inflicts on those left behind. And he offers an alternative way of thinking about success—more attentive to the role of luck in human affairs, more conducive to an ethic of humility, and more hospitable to a politics of the common good.

Michael J. Sandel is the author of seven books, including Justice: What's the Right Thing to Do? and What Money Can't Buy: The Moral Limits of the Market. He is the Anne T. and Robert M. Bass Professor of Government at Harvard University, where he has taught since 1980. He has taught his undergraduate course "Justice" to more than 15,000 Harvard students over the years, and video footage of the course was adapted into a PBS television series. Sandel graduated summa cum laude from Brandeis University and received his doctorate from Oxford University, where he was a Rhodes Scholar. He served on the George W. Bush administration's President's Council on Bioethics. He lives in Brookline, Massachusetts.