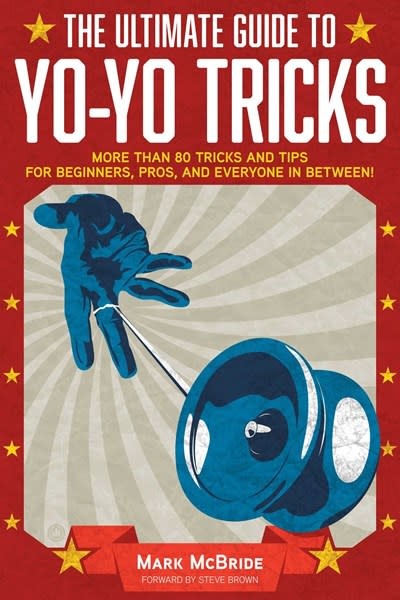 The Ultimate Guide to Yo-Yo Tricks

This ultimate handbook for everything about the Yo-Yo from theory to tricks and more!

The Ultimate Guide to Yo-Yo Tricks is not just a book of tricks; this is the how-to book for yo-yo enthusiasts and beginners alike.

This essential guide features tons of lessons to get yo-yo novices set up as well as insider tips to help seasoned yo-yoers hone their skills. It addresses pertinent topics such as the anatomy of the yo-yo, the basic terminology, the science behind the toy, as well the lingo spoken by those in the inner circle. In addition to the instructions are cool black-and-white illustrations and diagrams that give readers visuals to aid in trick development and mastery, and instructions to teach yo-yoers more than four dozen awesome tricks, including classics like “Around the World” and “The Sleeper” to more advanced, lesser-known tricks like “The Houdini Drop” and “Splitting the Atom.”

Start becoming a master today with the sage wisdom in The Ultimate Guide to Yo-Yo Tricks.

Mark McBride is the yo-yoer credited with the invention of AAA and has developed some of the first tricks in this style of play, including Velvet Rolls. In addition to authoring The Yonomicon, he is a founding member of 40 Watt Halo, a clothing/sticker design company dedicated to the skill toys community. He is a former Yomega demonstrator, a member of Duncan Crew World-Wide, and puts his extensive experience with video shoots, video editing, and producing to use by acting as cameraman/director/producer in most of Duncan's video productions.

Steve Brown is a father, husband, entrepreneur, and U.S. National YoYo Master. He invented one of the five styles of yoyo play, won a few contests, lost a few contests, and has been a pretty useful nuisance in the yoyo industry for more than 20 years. He runs YoYoNews.com, and is the #2 guy at CLYW, an amazing Canadian yoyo company. He lives in Ohio with his family and two indifferent cats.