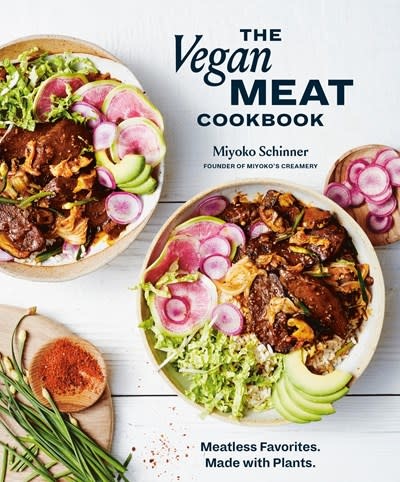 From the Impossible Burger and Beyond Meat to MorningStar Farms, Boca Burgers, and more, plant-based meats are a growing trend for those who want to help the planet, animals, and their health but don’t want to give up the meaty flavors they love. In The Vegan Meat Cookbook, bestselling author Miyoko Schinner guides you through the maze of products available on store shelves and offers straightforward guidance on how to best use them (or a DIY vegan meat option) in nearly eighty recipes, from Sausage Calzones with Roasted Fennel and Preserved Lemon to Carne Asada Enchiladas. Dig in to a satisfying vegan meal of Buttermilk Fried Chicken or Shepherd’s Pie. Wow your guests with Coq Au Vin, Linguine with Lemon-Garlic Scallops, or Lettuce Wraps with Spicy Garlic Prawns.

For those interested in making their own vegan meats and cheese from scratch, there are twenty-eight recipes for Juicy Chicken, King Trumpet Mushroom Bacon, Easy Buffalo Mozzarella, Miyoko’s famous UnTurkey, and many more DIY meatless meats that you’ll never find in stores. Whether you’re cutting back on meat for your health, the environment, animal welfare, or even for affordability, The Vegan Meat Cookbook will satisfy the cravings of flexitarians, vegans, vegetarians, and even carnivores.

Miyoko Schinner is the founder of Miyoko’s, the fastest-growing plant-based cheese and butter company in the country, carried in more than 29,000 retailers nationwide, plus Canada and Australia. Schinner is the author of four cookbooks, including The Homemade Vegan Pantry; cohost of the national PBS cooking show Vegan Mashup; a sought-after speaker for events and conferences, and cofounder of Rancho Compasión, an animal sanctuary that is home to over a hundred farm animals. She has been featured in Bloomberg, Forbes, the New York Times, Washington Post, Los Angeles Times, HuffPost, Food & Wine, and others.