Home » There's a Rock Concert in My Bedroom 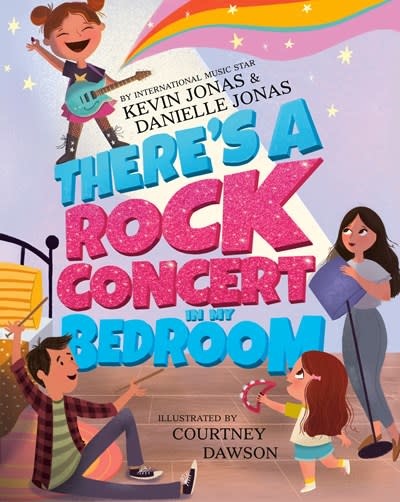 There's a Rock Concert in My Bedroom

A rip-roarin’, rock ’n’ roll picture book by international music star Kevin Jonas and his wife, Danielle Jonas, about the joy of music, the power of family, and facing your fears.

She loves the boom boom boom of a good bass beat.

She loves to rock out with her mom, her dad, and her little sister.

And she loves to twang, strum, and thrum on her guitar.

So when the sign-up sheet for the school talent show is posted, she adds her name right away! But the more Emma hears about the amazing talents her classmates will bring, the more nervous she gets. What if her guitar playing is more of a plink, plonk, squeak?

She’s suffering from a bad case of stage fright, and it’s up to her family to show her that performing can be fun too, and that she’s already a star.

Kevin Jonas is a father, actor, investor, philanthropist,and one third of Grammy-nominated, multiplatinum pop band Jonas Brothers. He was born and raised in New Jersey, where he resides with his wife and two daughters, Alena and Valentina.

Danielle Jonas is a mother, TV personality, actress, and founder/designer of jewelry company Danielle Jonas Co. She was also born and raised in New Jersey, where she resides with her husband and two daughters, Alena and Valentina.

Courtney Dawson is a children's book illustrator of many titles including A Vote is a Powerful Thing and The Stars Beckoned. She is inspired by the world around her and all of the good in it. Courtney loves to work on projects that are empowering, inclusive, and whimsical. She also loves rainy days and painting to Sam Cooke in her California studio.