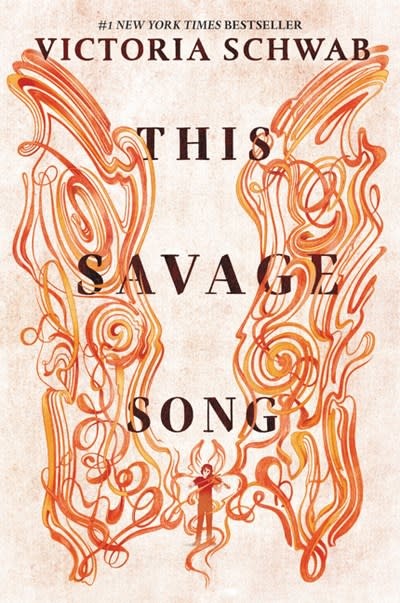 A new look for the instant #1 New York Times bestseller! In this dark urban fantasy from acclaimed author Victoria Schwab, a young woman and a young man must choose whether to become heroes or villains—and friends or enemies—with the future of their homes at stake. In a starred review, Booklist calls it “a darkly precise narrative that feels like a shiver down the spine.”

Kate Harker and August Flynn are the heirs to a divided city—a city where the violence has begun to breed actual monsters. All Kate wants is to be as ruthless as her father, who lets the monsters roam free and makes the humans pay for his protection. All August wants is to be human, as good-hearted as his own father, who uses his power to protect the innocent. Thrown together by a crumbling truce and a failed assassination attempt, Kate and August must flee to save themselves. In This Savage Song, Victoria Schwab creates her own dark metropolis, worthy of being compared to Gotham. But it’s not superheroes who will save this city—it’s two teenagers. This Savage Song is the first in a two-book saga about finding where we belong and becoming who we are meant to be. Kirkus said “The world is fascinating . . . the characters complicated, and the political machinations and emotional depths both charged and compelling . . . just the ticket for an all-night read.”This repackaged paperback edition will feature brand-new bonus content, including a map of Verity.

Victoria Schwab is the author of bestselling and acclaimed books, ranging from middle grade to adult. Her Shades of London series earned starred reviews and were national bestsellers. Her young adult novels include This Savage Song, Our Dark Duet, and The Near Witch, all New York Times bestsellers. Her work has been optioned for TV and film and has been translated into more than a dozen languages. She lives in Edinburgh, Scotland, and Nashville, Tennessee.