Home » This Will Be Funny Someday 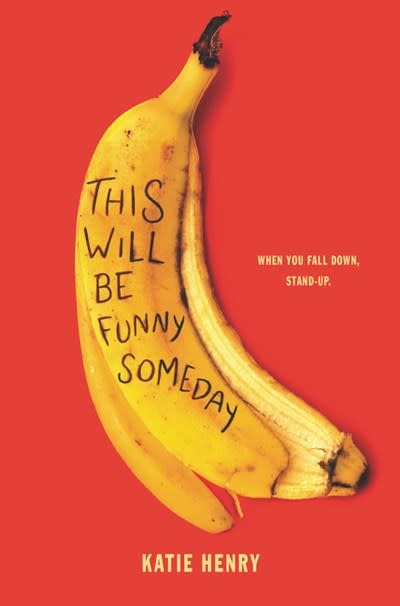 This Will Be Funny Someday

The Marvelous Mrs. Maisel comes to high school in critically acclaimed author Katie Henry’s coming-of-age YA contemporary about a girl who accidentally falls into the world of stand-up comedy. Perfect for fans of Jesse Andrews and Becky Albertalli.

A girl walks into a bar . . . then onto a stage, and up to the mic.Sixteen-year-old Izzy is used to keeping her thoughts to herself—in school, where her boyfriend does the talking for her, and at home, where it’s impossible to compete with her older siblings and high-powered parents—but when she accidentally walks into a stand-up comedy club and performs, the experience is surprisingly cathartic. After the show, she meets Mo, an aspiring comic who’s everything Izzy’s not: bold, confident, comfortable in her skin. Mo invites Izzy to join her group of friends and introduces her to the Chicago open mic scene.The only problem? Her new friends are college students—and Izzy tells them she’s one, too. Now Izzy, the dutiful daughter and model student, is sneaking out to perform stand-up with her comedy friends, and she can hardly remember all the lies she’s telling to keep her two lives separate.Her controlling boyfriend is getting suspicious, and her former best friend knows there’s something going on. But Izzy loves comedy and this newfound freedom. As her two parallel lives collide—in the most hilarious of ways—Izzy must choose to either hide what she really wants and who she really is or, finally, truly stand up for herself.

Katie Henry, author of Heretics Anonymous and Let’s Call It a Doomsday, is a writer living and working in New York City. She received her BFA in dramatic writing from NYU’s Tisch School of the Arts and is a published playwright, specializing in theater for young audiences. Her plays have been performed by high schools and community organizations in over thirty states. You can find her online at www.katiehenrywrites.com.