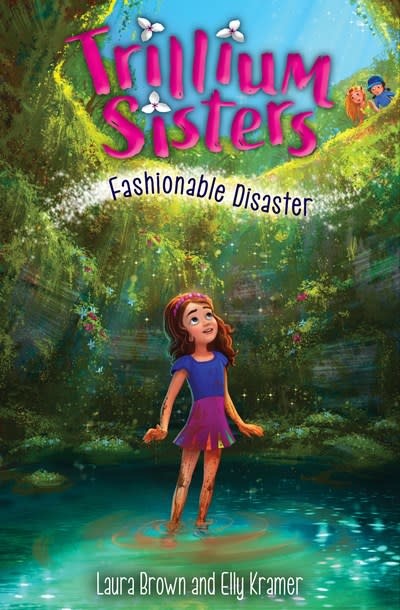 Being bossy leads to big problems, and only the Trills coming together can save the day in the third book in the Trillium Sisters series, perfect for fans of Mia Mayhem and The Wish Fairy.

When the Trills discover a rocky enclosure with natural hot spring while hiking, they realize it could be the location for the perfect new addition to the village—a spa! But all of the supplies they’ll need aren’t going to come cheap, so they decide they’ll organize a fashion show to raise funds. Luckily, everyone in Trillsville is willing to lend a hand to make the show a success.

As the local fashionista, Clare thinks she’s the clear choice to be in charge. But instead of leading, she’s just super bossy, refusing to listen to anyone else’s input. After an epic Trills blowup, rain leads to a landslide, leaving Clare trapped inside the enclosure and Giselle and Emmy on the other side of the rock wall, unable to help her. Will the sisters be able to put aside their differences to join forces (and join charms) so they can channel their powers and skills into getting Clare free?

With energetic black-and-white illustration thoughout, Fashionable Disaster focuses on family, community, environmental stewardship, and learning to work together as a team, continueing this magical series.

Series Overview: Three sisters with mysterious origins use their superpowers to solve problems around them and protect their mountain home.

Laura Brown is an early childhood expert, collaborates with businesses and organizations to create high quality educational media properties and products. She has written curricula and scripts and served as Content Expert and Research Director for series produced by Nick Jr., Disney Junior, Amazon Kids, DreamWorks Animation Television, PBS Kids, Universal Kids, and many others. A mother of three, she lives in Tenafly, NJ, but in another life, she would happily live in a treehouse in the forest.

Elly Kramer is currently the VP of Production & Development at Imagine Entertainment in their Kids and Family division and has created and led the development of numerous award-winning and highly-rated TV shows, online games, and innovative apps. As VP of Production and Development with Nickelodeon, she led the development of long and short-form content. She has also produced and developed over thirty-five shorts. Elly is a frequent speaker at film festivals and industry events. She lives in Los Angeles, CA.