Home » Noumena #2 Truth of the Divine 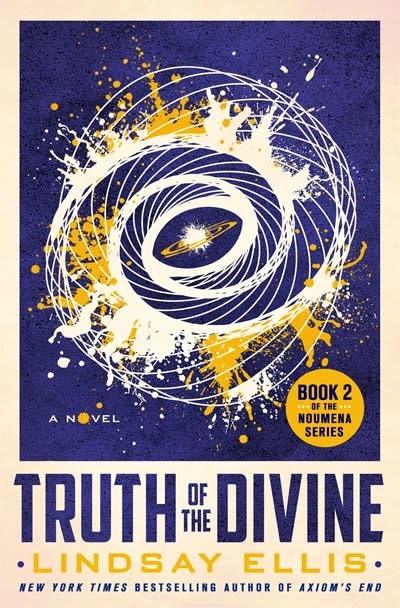 Noumena #2 Truth of the Divine

In Truth of the Divine, the human race is at the brink – they know they are not alone, but they don’t fully understand who has arrived. And neither does the government, since Ampersand isn’t giving them the answers they need to decide their legal status, namely: where did they come from? What do they want? What are they capable of?

With their personhood designation up in the air, the sky lights up again. A supernova’s worth of energy. It marks the return of Obelus – and the arrival of something else. Something that Cora has never seen before, even though at this point she would have sworn she’d seen everything.

In the madness near the crash site, one reporter gets caught up in the melee. Kaveh Mazandarani, two-time Pulitzer prize nominee, friend of Cora’s father Nils, sees more than he’s meant to. Originally taken as a hostage, he and Cora end up forming a bond of their own that neither of them could have predicted, caught up in an interstellar battle that will decide the future safety of life on earth, however you define it.

In Truth of the Divine, Lindsay Ellis deepens her exploration of the reality of a world faced with the presence of extra terrestrial intelligence, probing the essential questions of humanity and decency, and the boundaries of the human mind. While examining the question of what makes a human, Ellis investigates what makes a monster.

LINDSAY ELLIS is a New York Times bestselling author, media critic, and Hugo-nominated video essayist with 1.03 million subscribers on YouTube, over 98 million cumulative views of her channel, and 287K Twitter followers, with vocal fans like John Scalzi, Hank Green, and Seanan McGuire. After earning her bachelor's in Cinema Studies from NYU's Tisch School of the Arts, she earned her MFA in Film and Television Production from USC's School of Cinematic Arts with a focus in documentary and screenwriting. She lives in Long Beach, CA. Truth of the Divine is her second novel.