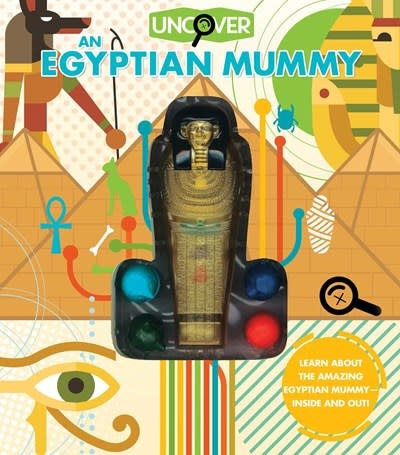 A fascinating three-dimensional presentation provides the reader with an in-depth, hands-on exploration of an Egyptian mummy.

This fascinating, three-dimensional presentation provides readers with an in-depth, hands-on exploration of an Egyptian mummy.

In Uncover an Egyptian Mummy, a fascinating three-dimensional presentation allows in-depth, hands-on exploration of an Egyptian mummy! This unique “model” can be deconstructed and rebuilt layer by layer, just by turning the page, so the reader can see how the ancient Egyptians prepared their dead. By combining a 3-D model with informative text and pictures, Uncover an Egyptian Mummy helps children understand the complexities of an ancient culture.

Lorraine Jean Hopping (aka, Lorraine Hopping Egan) is an award-winning writer, editor, and game inventor. Other books include Explore Within an Egyptian Mummy; Bone Detective: The Story of Forensic Anthropologist Diane France(nominated as a 2007 finalist in the young adult category of the AAAS/Subaru SB&F Prize for Excellence in Science Books); Space Rocks: The Story of Planetary Geologist Adriana Ocampo; Autopsies, Investigating a Crime Scene; Jacques Cousteau: Saving Our Seas; and Sally Ride: Space Pioneer; and Chief Joseph: The Voice for Peace .

Graphic artist, painter, illustrator, and designer Ryan Hobson has created work for Disney, Silver Dolphin, Chronicle Books, Scholastic, SmartLab, and Lucasfilm. Known for his versatility and and imaginative style, some of his notable work includes Mission: Mars, Jedi Path, Explore Within A Mummy, Inside A T. Rex, and many others. He was born and raised in Anchorage, Alaska, and worked in the oil fields in his younger years.  He now resides in Seattle.