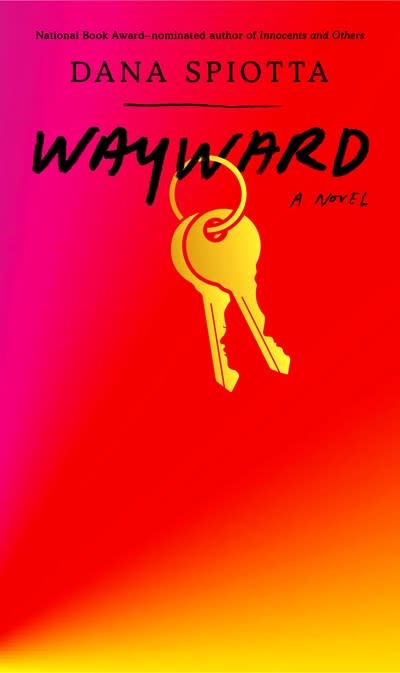 A moving, funny, engrossing novel about mothers and daughters, and one woman’s midlife reckoning, from the renowned author of Stone Arabia and Eat the Document

On the heels of the election of 2016, Samantha Raymond’s life begins to come apart: her mother is ill, her teenage daughter is increasingly remote, and at fifty-two she finds herself staring into “the Mids”—that hour of supreme wakefulness between three and four in the morning in which women of a certain age suddenly find themselves contemplating motherhood, mortality, and, in this case, the state of our unraveling nation.

When she falls in love with a beautiful, decrepit house in a hardscrabble neighborhood in Syracuse, she buys it on a whim and flees her suburban life—and her family—as she grapples with how to be a wife, a mother, and a daughter, in a country that is coming apart at the seams.

Dana Spiotta’s Wayward is a stunning novel about aging, about the female body, and about female difficulty—female complexity—in the age of Trump. Probing and provocative, brainy and sensual, it is a testament to our weird, off-kilter America, to reforms and resistance and utopian wishes, and to the beauty of ruins. Tremendous new work from one of the most gifted writers of her generation.

DANA SPIOTTA is the author of Innocents and Others, which won the St. Francis College Literary Prize and was short-listed for The Los Angeles Times Book Prize; Stone Arabia, which was a National Book Critics Circle Award finalist; Eat the Document, which was a National Book Award finalist; and Lightning Field. Spiotta was a Guggenheim Fellow, a New York Foundation for the Arts Fellow, and she won the 2008-9 Rome Prize from the American Academy in Rome. In 2017, the American Academy of Arts and Letters awarded her the John Updike Prize in Literature. Spiotta lives in Syracuse and teaches in the Syracuse University MFA program.