Home » We Can: Portraits of Power 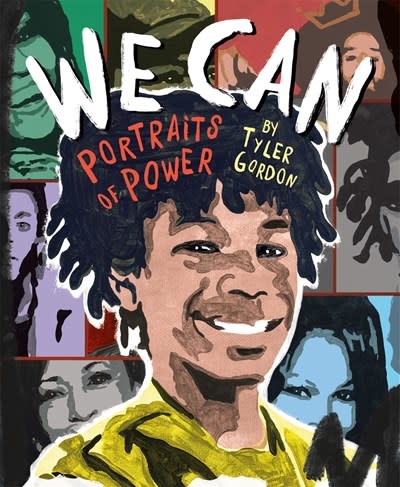 We Can: Portraits of Power

From teenage artistic prodigy Tyler Gordon, this is a picture book filled with gorgeous portraits of-and information about--the people who inspire him, from Kamala Harris to LeBron James.

"When I was born, the doctors told my mom that if I did survive I would have lots of health problems and be blind, deaf and severely mentally delayed . . . Boy were they wrong!" —Tyler Gordon

Fourteen-year-old Tyler Gordon's journey from a regular kid growing up in San Jose, California, to a nationally recognized artist wasn’t without its challenges. For the first six years of his life he was deaf, which led to a stutter — and bullying. Art gave him a creative outlet for his pain. Then, after painting a portrait of Kamala Harris, he received a call from the woman herself. Soon his art was everywhere. He had an interview with the The Today Show. He was the youngest artist featured in the Beverly Center. His portrait of LeBron James became the cover of TIME Magazine. And that was only the beginning!

Here is a picture book by Tyler Gordon, featuring his sensational art alongside short explanations about why these celebrities inspire Tyler.

Tyler Gordon is a fourteen-year-old painter whose work has been featured in TIME Magazine, Essence, Good Morning America, and ABC News. In 2020, he was awarded the Global Child Prodigy Award. He currently lives in San Jose, California with his family. thetylergordon.com