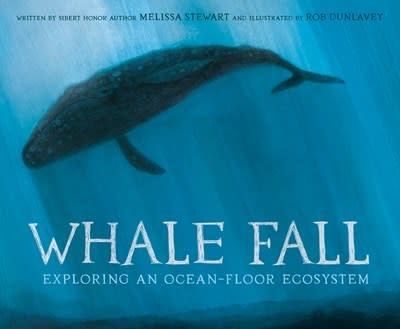 This fascinating nonfiction picture book filled with stunning illustrations details the end of life for a whale, also known as a whale fall, when its body sinks to the ocean floor and becomes an energy-rich food source for organisms living in the deep sea.

When a whale dies, its massive body silently sinks down, down, through the inky darkness, finally coming to rest on the silty seafloor. For the whale, it's the end of a 70-year-long life. But for a little-known community of deep-sea dwellers, it's a new beginning. First come the hungry hagfish, which can smell the whale from miles around. Then the sleeper sharks begin their prowl, feasting on skin and blubber. After about six months, the meat is gone. Year after year, decade after decade, the whale nourishes all kinds of organisms from zombie worms to squat lobsters to deep-sea microbes.

Melissa Stewart has written more than 200 science books for children, including Tree Hole Homes: Daytime Dens and Nighttime Nooks; the ALA Notable Book Feathers: Not Just for Flying and the SCBWI Golden Kite Honor title Pipsqueaks, Slowpokes, and Stinkers: Celebrating Animal Underdogs. She co-authored 5 Kinds of Nonfiction: Enriching Reading and Writing Instruction with Children’s Books and edited the anthology Nonfiction Writers Dig Deep: 50 Award-Winning Authors Reveal the Secret of Engaging Writing. Melissa maintains the award-winning blog Celebrate Science and serves on the Society of Children’s Book Writers and Illustrators board of advisors.

Rob Dunlavey is the illustrator of In the Woods by David Elliott, which received three starred reviews, and Owl Sees Owl by Laura Goodwin, which garned four starred reviews and was named a School Library Journal Best Book of the Year, among others. His artwork has been featured in the New York Times, the Boston Globe, Businessweek, and the Los Angeles Times.