Home » When Can We Go Back to America?: Voices of Japanese American Incarceration during WWII 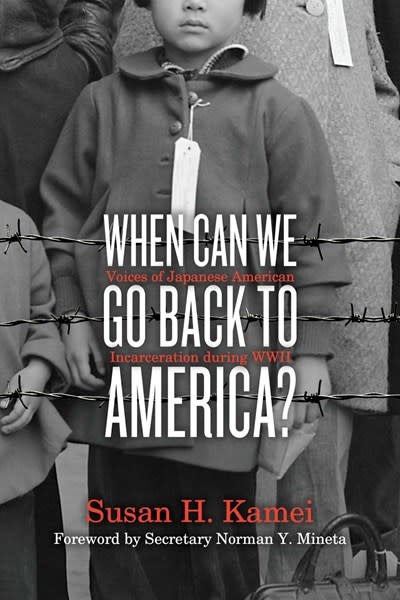 When Can We Go Back to America?: Voices of Japanese American Incarceration during WWII

In the vein of They Called Us Enemy comes a powerful new book that recounts the experience of Japanese American incarceration during World War II from the perspective of the young people affected.

It’s difficult to believe it happened here, in the Land of the Free: After the bombing of Pearl Harbor in 1941, the United States government forcibly removed more than 120,000 persons of Japanese ancestry from the Pacific Coast and imprisoned them in desolate detention camps until the end of World War II just because of their race.

In what Secretary Norman Y. Mineta describes as a “landmark book,” he and others who lived through this harrowing experience tell the story of their incarceration and the long-term impact of this dark period in American history. For the first time, why and how these tragic events took place are interwoven with more than 130 individual voices of those who were unconstitutionally incarcerated, many of them children and young adults.

Now more than ever, their words will resonate with readers who are confronting questions about racial identity, immigration, and citizenship, and what it means to be an American.

Susan H. Kamei received her JD from the Georgetown University Law Center. She teaches at the University of Southern California on the legal ramifications of the incarceration of persons of Japanese ancestry during World War II and how they apply to constitutional issues, civil liberties, and national security considerations today.

Norman Y. Mineta and his family spent the years during World War II incarcerated at the Santa Anita Assembly Center and the Heart Mountain Relocation Center. He served the city of San Jose, California, from 1967 to 1974 as a city council member and as its mayor, and went on to represent California’s Thirteenth Congressional District in the US House of Representatives from 1974 to 1995. As a member of Congress, Mineta served as chairman of the US House Committee on Public Works and Transportation from 1992 to 1994 and chaired the subcommittees on aviation and surface transportation. In 2000, President Bill Clinton appointed Mineta as US Secretary of Commerce, making him the first Asian American to become a member of a presidential cabinet. In 2001, President George W. Bush appointed him as US Secretary of Transportation, where he served until 2006. The numerous awards he has received in recognition of his leadership include the Presidential Medal of Freedom—the highest civilian honor in the United States—and the Wright Brothers Memorial Trophy, awarded for significant public service of enduring value to aviation in the United States. His many civic roles include serving as the chairman of the board of trustees of the Japanese American National Museum.