Home » Who Was Alex Trebek? 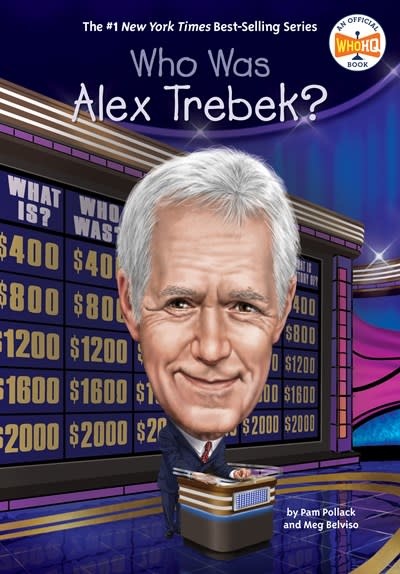 Who Was Alex Trebek?

Clue: A former journalist who became the beloved host of America's favorite game show and quiz competition. Answer: Who Was Alex Trebek?, the latest title in the #1 New York Times Best-Selling series.

Born in Ontario, Canada, in 1940, Alex Trebek grew up listening to the radio and hoping to one day become a broadcaster. His dream became a reality when he was hired as a reporter for the Canadian Broadcasting Corporation in 1961. Alex's composed nature and ability to skillfully improvise while on televsion eventually led to his role as the host of Jeopardy!, the biggest quiz game show in the United States.

Alex not only earned numerous awards over the course of his thirty-six-year-long hosting career, but he also earned the admiration of the contestants on the show and dedicated viewers watching at home.

Pam Pollack and Meg Belviso are authors of several books in this series, including Who Is George Lucas?, Who Was Alfred Hitchcock?, Who Was Alexander Hamilton?, Who Was Celia Cruz?, and Who Is Neil DeGrasse Tyson?