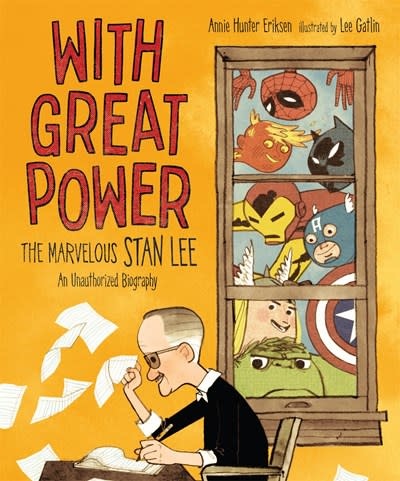 Stan Lee didn’t have hulking strength. Or fantastic flexibility. Or cat-like reflexes. His superpower was creating heroes who did.

For Stan Lee, it was books of adventure, monsters, and magic that helped him transform from an ordinary boy to a superstar superhero creator. At first, reading these stories was a pathway to a world bigger than his family’s tiny apartment in New York City, but it wasn’t long until Stan was crafting his own stories, creating comics professionally when he was still just a teenager! Still, writing wasn’t exciting when the heroes were always the same: strong, perfect, and boring. Stan had a revolutionary idea. What if anyone—even an ordinary kid—could be a superhero?

Discover more about the life of the Cameo King, known to many for his appearances in the Marvel Cinematic Universe, and how he revolutionized comics with this vibrant introduction bustling with action, humor, and references for fans new and old. ‘Nuff said!

Annie Hunter Eriksen grew up with a love of superheroes, and remains a huge Marvel nerd to this day. Her favorite comic book series is Ms. Marvel. She works as a freelance writer and lives in Ohio with her husband, cat named Cosmo, and hedgehog named Pineapple.

Lee Gatlin learned to draw by looking at cartoons, kids’ books, and comics. He is the illustrator of the Monster School by Kate Coombs (Chronicle). In addition to drawing and making things, he enjoys making a racket on the piano or banjo. An illustrator and cartoonist, he lives with wife and three children in Georgia.