Home » Woman of Light: A novel 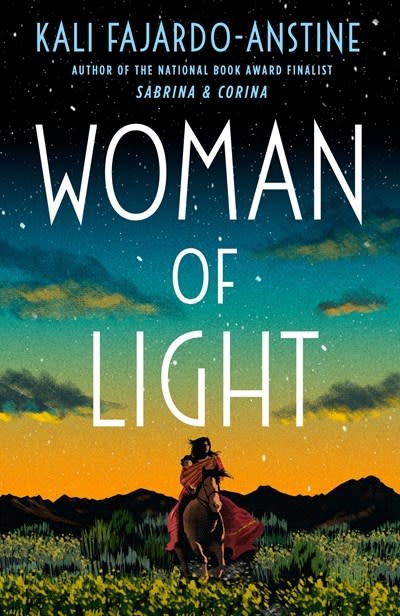 Woman of Light: A novel

A dazzling epic of betrayal, love, and fate that spans five generations of an Indigenous Chicano family in the American West, from the author of the National Book Award Finalist Sabrina & Corina

“There is one every generation—a seer who keeps the stories.”

Luz “Little Light” Lopez, a tea leaf reader and laundress, is left to fend for herself after her older brother, Diego, a snake charmer and factory worker, is run out of town by a violent white mob. As Luz navigates 1930’s Denver on her own, she begins to have visions that transport her to her Indigenous homeland in the nearby Lost Territory. Luz recollects her ancestors’ origins, how her family flourished and how they were threatened. She bears witness to the sinister forces that have devastated her people and their homelands for generations. In the end, it is up to Luz to save her family stories from disappearing into oblivion.

Written in Kali Fajardo-Anstine’s singular voice, the wildly entertaining and complex lives of the Lopez family fill the pages of this multigenerational western saga. Woman of Light is a transfixing novel about survival, family secrets, and love, filled with an unforgettable cast of characters, all of whom are just as special, memorable, and complicated as our beloved heroine, Luz.

Kali Fajardo-Anstine is the author of Sabrina & Corina, a finalist for the National Book Award, the PEN/Bingham Prize, The Story Prize, and winner of an American Book Award. She is the 2021 recipient of the Metcalf Award from the American Academy of Arts and Letters. Her work has been honored with the Denver Mayor’s Award for Global Impact in the Arts and the Mountains and Plains Independent Booksellers Association Reading the West Award. She has written for The New York Times, Harper’s Bazaar, ELLE, The American Scholar, Boston Review, and elsewhere, and has received fellowships from MacDowell, Yaddo, Hedgebrook, and Tin House. Fajardo-Anstine earned her MFA from the University of Wyoming and has lived across the country, from Durango, Colorado, to Key West, Florida. She is the 2022/2023 Endowed Chair of Creative Writing at Texas State University. She is from Denver, Colorado.