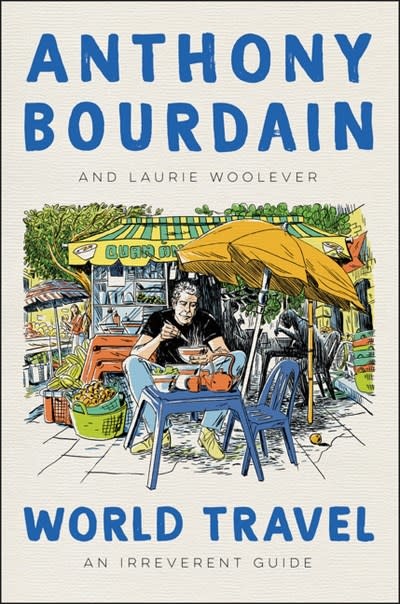 A guide to some of the world’s most interesting places, as seen and experienced by writer, television host, and relentlessly curious traveler Anthony Bourdain

Anthony Bourdain saw more of the world than nearly anyone. His travels took him from the hidden pockets of his hometown of New York to a tribal longhouse in Borneo, from cosmopolitan Buenos Aires, Paris, and Shanghai to Tanzania’s utter beauty and the stunning desert solitude of Oman’s Empty Quarter—and many places beyond.In World Travel, a life of experience is collected into an entertaining, practical, fun, and frank travel guide that gives readers an introduction to some of his favorite places—in his own words. Featuring essential advice on how to get there, what to eat, where to stay, and, in some cases, what to avoid, World Travel provides essential context that will help readers further appreciate the reasons why Bourdain found a place enchanting and memorable.Supplementing Bourdain’s words are a handful of essays by friends, colleagues, and family that tell even deeper stories about a place, including sardonic accounts of traveling with Bourdain by his brother Chris; a guide to Chicago’s best cheap eats by legendary music producer Steve Albini; and more. For veteran travelers, armchair enthusiasts and all those in between, World Travel offers a chance to experience the world like Anthony Bourdain.

Anthony Bourdain was the author of the novels Bone in the Throat and Gone Bamboo, the memoir A Cook’s Tour, and the New York Times bestsellers Kitchen Confidential, Medium Raw, and Appetites. His work appeared in the New York Times and the New Yorker. He was the host of the popular television shows No Reservations and Parts Unknown. Bourdain died in June 2018.Laurie Woolever is a writer and editor, and spent nearly a decade assisting Anthony Bourdain, with whom she coauthored the cookbook Appetites in 2016. She’s written about food and travel for the New York Times, GQ, Food & Wine, Lucky Peach, Saveur, Dissent, Roads & Kingdoms, and others, and has worked as an editor at Art Culinaire and Wine Spectator.