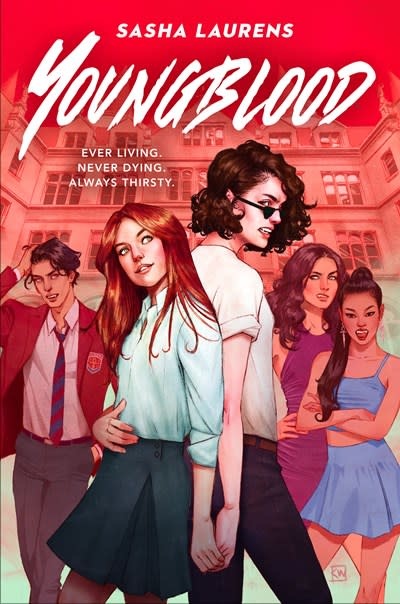 For fans of Vampire Diaries and dark academia, two queer teen bloodsuckers at an elite vampire-only boarding school must go up against all of Vampirdom when they uncover a frightening conspiracy on campus.

Kat Finn and her mother can barely make ends meet living among humans. Like all vampires, they must drink Hema, an expensive synthetic blood substitute, to survive, as nearly all of humanity has been infected by a virus that’s fatal to vampires. Kat isn’t looking forward to an immortal life of barely scraping by, but when she learns she’s been accepted to the Harcote School, a prestigious prep school that’s secretly vampires-only, she knows her fortune is about to change.

Taylor Sanger has grown up in the wealthy vampire world, but she’s tired of its backward, conservative values—especially when it comes to sexuality, since she’s an out-and-proud lesbian. She only has to suffer through a two more years of Harcote before she’s free. But when she discovers her new roommate is Kat Finn, she’s horrified. Because she and Kat used to be best friends, a long time ago, and it didn’t end well.

When Taylor stumbles upon the dead body of a vampire, and Kat makes a shocking discovery in the school’s archives, the two realize that there are deep secrets at Harcote—secrets that link them to the most powerful figures in Vampirdom and to the synthetic blood they all rely on.

Sasha Laurens is originally from Northern California and has lived in Michigan, New York, and St. Petersburg, Russia. She has a PhD in political science and lives in Brooklyn. Her first novel, A Wicked Magic, was published in 2020.