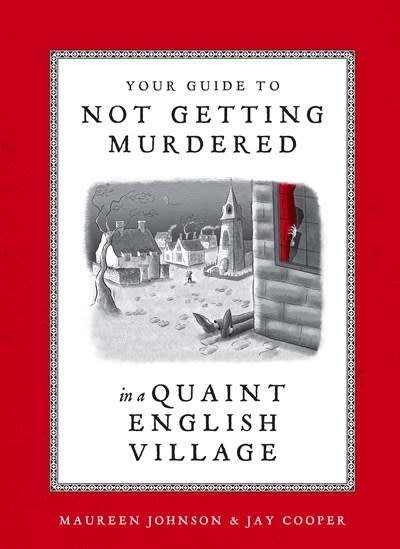 Your Guide to Not Getting Murdered in a Quaint English Village

In the England of murder mysteries and TV detectives, no destination is deadlier than a quaint country village, and you never know you’re in a murder village until it’s too late. No attraction or local character is safe—whether in the pub for a pint, or on the manicured grounds of the local estate for a shooting party, bodies can turn up anywhere! Danger lurks around every cobblestone corner. If you are foolish enough to make the trip, at least be prepared.

Brought to life with dozens of Gorey-esque drawings by illustrator Jay Cooper and peppered with allusions to classic crime series and unmistakably British murder lore, Your Guide to Not Getting Murdered in a Quaint English Village gives you the tools you need to avoid the same fate, should you find yourself in a suspiciously cozy English village (or simply dream of going). Good luck, and whatever you do, avoid the vicar.

Maureen Johnson is the New York Times and USA Today bestselling author of several YA novels, including 13 Little Blue Envelopes, Suite Scarlett, The Name of the Star, and Truly Devious. Her work has appeared in publications such as The New York Times, BuzzFeed, and The Guardian, and she has also served as a scriptwriter for EA Games. She has an MFA in writing from Columbia University and lives in New York City.

Jay Cooper is a graphic designer of books and theatrical advertising who is still baffled by the fact that he's worked on more than one hundred Broadway musicals and plays. However, nothing makes him happier than writing and illustrating stories for kids. He is the author and illustrator of the Spy Next Door series and the Pepper Party series, as well as the illustrator of Food Trucks!, Delivery Trucks!, and the Bots series.