Home » Your Place in the Universe 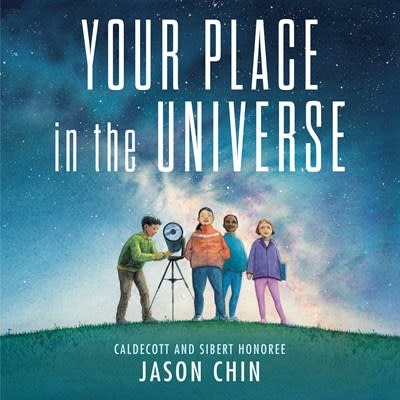 Your Place in the Universe

With crisp illustration and intriguing science, Your Place in the Universe introduces readers to the mind-boggling scale of the known Universe.

Most eight-year-olds are about five times as tall as this book…but only half as tall as an ostrich, which is half as tall as a giraffe…twenty times smaller than a California Redwood! How do they compare to the tallest buildings? To Mt. Everest? To stars, galaxy clusters, and…the universe?

Jason Chin, the award-winning author and illustrator of Grand Canyon has once again found a way to make a complex subject—size, scale and almost unimaginable distance—accessible and understandable to readers of all ages. Meticulously researched and featuring the highly detailed artwork for which he is renowned, this is How Much is a Million for the new millenium, sure to be an immediate hit with kids looking for an engaging way to delve into perspective, astronomy, and astrophysics. Curious readers will love the extensive supplementary material included in the back of the back of the book

Jason Chin is a celebrated author and illustrator of children’s books. He illustrated Nine Months, by Miranda Paul, and wrote and illustrated Grand Canyon, awarded a Caldecott Honor, a Sibert Honor, and the NCTE Orbis Pictus Award. His other nonfiction titles, including Redwoods, Island: A story of the Galápagos, Coral Reefs, and Gravity, have received numerous starred reviews and other accolades. Jason lives in Vermont with his wife, Deirdre Gill, and their children.