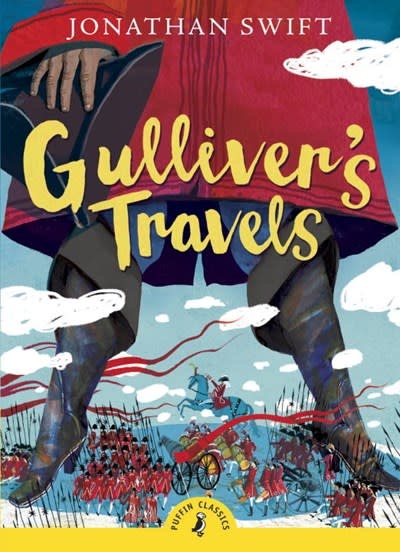 "It is universally read, from the

cabinet council to the nursery," remarked Alexander Pope when Gulliver's Travels was published in 1726. One of the unique books of world literature, Swift's masterful satire describes the astonishing voyages of one Lemuel Gulliver, a ship's surgeon, to surreal kingdoms inhabited by miniature people and giants, quack philosophers and scientists, horses endowed with reason and men who behave like beasts. Written with great wit and invention, Gulliver's Travels is a savage parody on man and his institutions that has captivated readers for nearly three centuries.

The Modern Library has played a significant role in American cultural life for the better part of a century. The series was founded in 1917 by the publishers Boni and Liveright and eight years later acquired by Bennett Cerf and Donald Klopfer. It provided the foundation for their next publishing venture, Random House. The Modern Library has been a staple of the American book trade, providing readers with afford-

tant works of literature and thought. For the Modern Library's seventy-

as its emblem the running torch-

bearer created by Lucian Bernhard in 1925 and refurbishing jackets, bindings, and type, as well as inau-

gurating a new program of selecting titles. The Modern Library continues to provide the world's best books, at the best prices. As bestselling author and critic Allan Bloom observed: "Gulliver's Travels is an amazing rhetorical achievement. Swift had not only the judgment with which to arrive at a reasoned view of the world but the fancy by means of which he could re-create that world in a form which teaches where argument fails and which satisfies all while misleading none."

Jonathan Swift was born in Dublin, Ireland, in 1667, where he lived for much of his life. He was well known for writing satires and political pamphlets. In 1726, Swift published Gulliver's Travels anonymously and it was an immediate hit, reprinting three times that year. Although Gulliver's Travels was written as a satire of human pride, not as a children's book, it has long been considered a classic for young readers. Jonathan Swift died on October 19, 1745.